Márta Ótott is a PhD student in the English and American Literature and Culture PhD program at the Institute of English and American Studies at the University of Szeged. She specializes in American drama and theater, devoting special attention to experimental theaters, Off- and Off-Off Broadway theaters and the plays they present. Email: 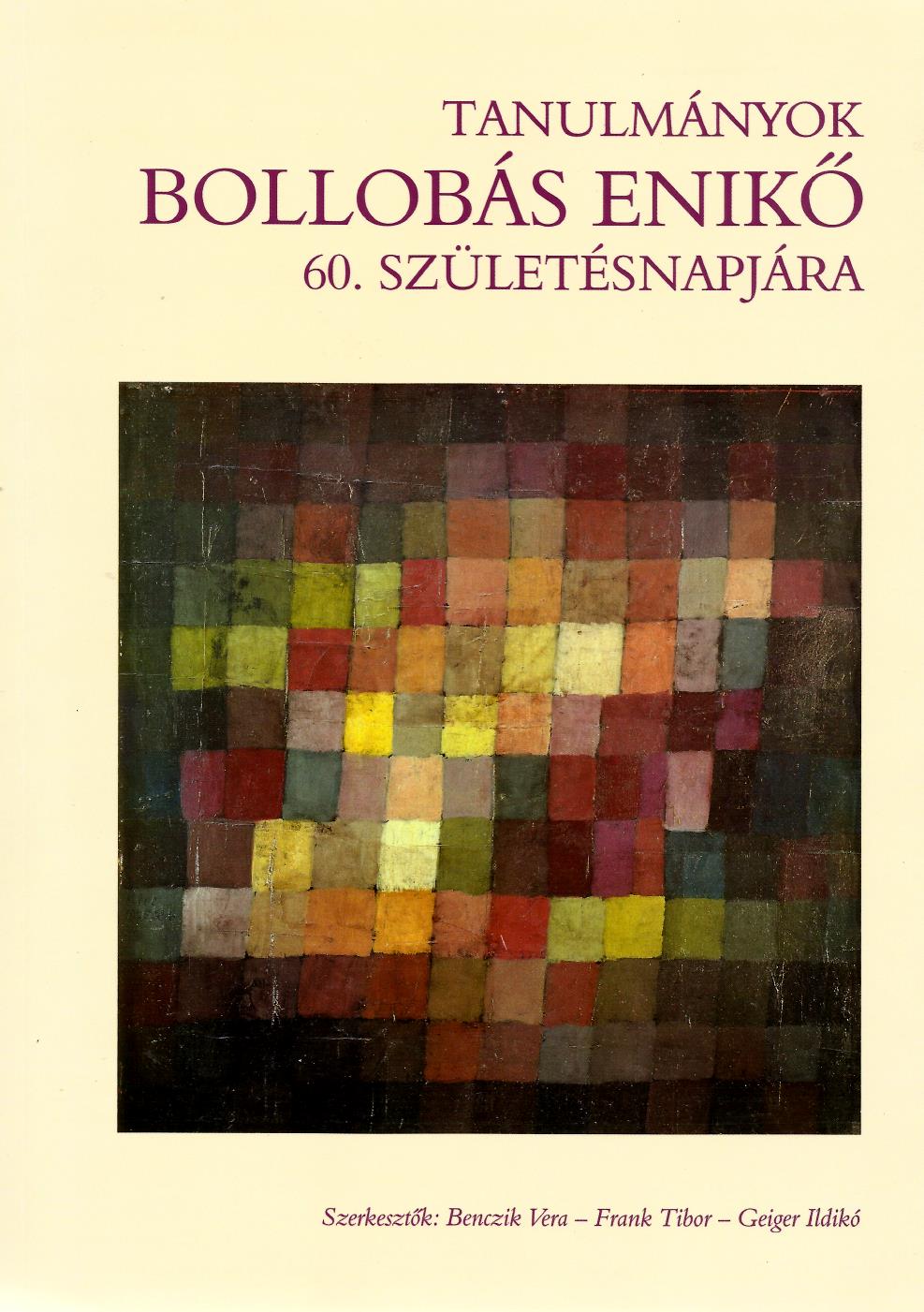 This collection was written in honor of the internationally acclaimed Hungarian scholar of English and American Studies, Enikő Bollobás. The book features the presentation and appreciation of her extensive academic oeuvre and achievements, essays from all aspects of English and American Studies, as well as poems by Gyula Kodolányi and Géza Szőcs. This multifaceted palette of contributions to greet Professor Bollobás is as wide-scoped and nuanced as the field itself.

The personal memories of Tibor Frank, the tabula gratulatoria, and the two poems with their musicality and finesse make a moving introduction to this book; the warm way the person, the scholar, the diplomat, the beloved professor, and mentor is outlined on the first few pages demonstrates what Enikő Bollobás means to her colleagues and friends.

The authors of the studies in this Festschrift offer their latest research results in chapters devoted to literature, linguistics, history, and cultural studies in separate sections. Each section is divided and shortly introduced by pertinent quotations from Emily Dickinson’s poems, a writer whose works inspired the innovative criticism of Professor Bollobás. The topics presented in this celebratory writing range from women writers, African American Studies, Native American Studies, drama and theatre, novels, short stories, and poems, literary theory and history, American culture and cultural history, travel writing, American history and politics, performance art, film and adaptation, English language, and more. Some of the authors elaborate on their findings from a humble distance, some of them address Professor Bollobás directly, yet others share their thoughts in a wider context. In a similar vein, some of the authors chose to write in English, while others wrote in Hungarian.

The volume pays special attention to Professor Bollobás’ latest English language book, They Aren’t Until I Call Them – Performing the Subject in American Literature (2010). This work is a language-centered analysis of a selection of American literary works. Here, Bollobás applies poststructuralist theories of performativity and examines the means by which the subject as agent can be and is constructed. Many of the essays in the celebratory volume prove that They Aren’t Until I Call Them has been highly inspiring for various contributors. For example, Donald Wesling compares Bollobás’s They Aren’t to Douglas Richard’s Performative Linguistics: Speaking and Translating as Doing Things With Words (2003). Wesling concludes that both theorists suggest new and insightful methods of intertwining disciplines within a particularly “productive category” (134): performativity. Also inspired by Bollobás’s approaches in reading Emily Dickinson, Pál Hegyi elaborates further on the use of catachresis in Dickinson’s poetry (147-156) by using They Aren’t and “Troping the Unthought: Catachresis in Emily Dickinson’s Poetry” as theoretical background for his argumentation on the changes in the notion’s definition. Furthermore, Virginia Dominguez follows the track of They Aren’t in her essay entitled “Are There Umpires and Quasi-Umpires Outside the Baseball Field?” (281-292). She agrees with Bollobás’s stance and provides pragmatic examples where the same analogy applies: the umpire on the baseball field. Words sometimes do not merely create new things in the world, but also validate them and justify their existence: this is the starting point of Dominguez’s inquiry. In order to prove the problematic position and the responsibility of the umpire, the judge and the medical expert, she delineates the pitfalls and requirements of these professions, which are given the power of declaring a strike to be a strike, or a person to be guilty or not.

A particularly interesting study connecting Hungarian culture with issues in American Studies is Tibor Frank’s “Világkiállítások Amerikája – magyar útirajzokban 1876-1939” [“The America of World Exhibitions in Hungarian Travel Writing 1876-1939”]. This text explores the early perceptions of the United States in Hungary, and tells about the ambivalent and sometimes contradictory images of America that travelers brought back home (199-210). In this context, too, Zoltán Peterecz’s “Korai kulturális kötelékek Magyarország és az Egyesült Államok között” [“Early Cultural Relations between Hungary and the United States”] investigates the cultural, political and financial relationship between the two countries in the early twentieth century, which resulted in various scholarship programs for Hungarian students (229-237). It was a kind gesture to include this piece of writing in the book, as Professor Bollobás greatly helped students of English and American Studies at Eötvös Loránd University in Budapest to take the chance of visiting the United States by applying to the Kellner Scholarship Program.

Zsófia Bán offers an exciting reading of The Danube Exodus: The Rippling Currents of the River by Péter Forgács in the framework of trauma issues (259-267); while Edit Zsadányi interprets the effects of communist dictatorship in György Dragomán’s A fehér király [The White King] by remembering the liberating experience of studying American Studies after the fall of communism in Hungary. Also pertaining to the intersection of American and Hungarian culture, Tibor Glant’s essay on Route 66 is worth a special mention (211-217). Glant informs the reader that there has been a reconceptualization and marketization of the legendary route. Now that this reconceptualization reached Hungary, the Hobo Blues Band’s lyrics are not our sole guide to Route 66, he claims.

Jane Desmond’s “Remapping Relational Configurations in ‘America Studies’” is loosely connected to the aforementioned essays on Hungarian-American relations (277-280). Desmond’s text provokes crucial questions concerning Hemispheric Studies within the wider frames of the field including the following: what are the limitations and the possibilities of this field? How can all the knowledge accumulated in the field be categorized and what is at stake when a scholar does research on a culture on the other hemisphere?

The last pages of the far-reaching volume contain an extensive list of publications by Professor Bollobás. This list epitomizes the considerable impact she has on the academic community of English and American Studies in Hungary and abroad. The diversity of her papers and books, her international reputation testify that there is a lot at stake for a Hungarian scholar of American Studies.

Carefully selected and rendered, these informative papers constitute a colorful collection which is not only reflective on the scholarly achievements of Professor Bollobás, but which is, albeit on a miniature scale, representative of the field’s various aspects.