“What Happened to Our Face?” Reflection on the Subjectivity of Euro-American Ethnicity. A Review of Ethnic Subjectivity in Intergenerational Memory Narratives: Politics of the Untold" by Lívia Szélpál

Lívia Szélpál, senior lecturer, Department of English Literatures and Cultures, Institute of English Studies, University of Pécs (PTE), completed her MA in American Studies and History at the University of Szeged and earned a Ph.D. at Central European University in Comparative History of Central, Southeastern and Eastern Europe. Her research interests include American Studies, the history (including the unconventional histories) of the USA, the issue of history on film, urban history, modern and contemporary American culture. Email: 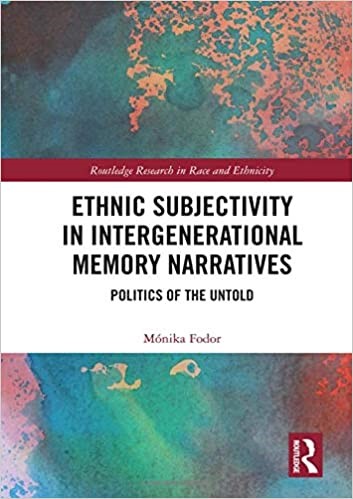 Mónika Fodor is the author of Perspectives of Identity in Narrative and currently works at the Institute of English Studies, University of Pécs. She researches Sociolinguistics, Discourse Analysis, and Cultural Anthropology. In her recently published book, Fodor maps the constructed notions of “ethnic subjectivity” and “intergenerational memory” by interviewing, researching, and analyzing seventeen second- or late-generation European American people (4). Fodor interviews ordinary people, and her analysis reveals their unique personal history embedded in public history. She highlights the complexity of identity construction with an ethnic heritage over more than one generation. This provides a solid and cohesive theoretical framework for the volume. Ethnic Subjectivity in Intergenerational Memory Narratives is a pivotal contribution to the unexplored field of the narrative structure of intergenerationally transferred memory practice. As far as I know, no similar interdisciplinary volume on this topic has been published before.

The well-argued aim of the book is enclosed by a short essay “What Happened to Our Face” [“Mi történt az arcunkkal”], the Hungarian author and essayist György Konrád refers to the continuation of the past in the complexity of the present interrelation of personal and public histories. Fodor cites Konrád “that every book is born as the child of some situation, and it does not hurt if that situation is not dull” [Minden könyv valamilyen helyzetben születik, és a könyvnek nem árt, ha ez a helyzet nem unalmas.] (64). This quotation can be interpreted as a motivational force for Fodor who argues that her book was born by the overall growing interest in the ways personal, inherited, and collectively constructed remembrances structuring the content and narratives of the storytellers (278).

Ethnic Subjectivity in Intergenerational Memory Narratives includes six chapters conceptualizing the working paradigm and notions bracing new critical perspectives. The well-organized structure of the research focuses on five main topics that emerged as an outcome of coding the interview material and are discussed in separate chapters: (1) construction of the ethnic self, (2) assimilation, (3) historical consciousness, (4) geographical sites of ethnic subjectivity, and (5) traditions (7). Each chapter is embedded into thematic narrative samples from interviews and ended by the bibliography of the research.

Chapter One “Conceptualizing Ethnic Subjectivity in Personal and Intergenerational Memory Narratives” outlines and defines the underlying notions and practices that frame the analysis of the personal histories such as subjectivity, ethnicity in an American context, intergenerational or postmemory and narrative (3). The chapter provides an alternative conceptualization to narrative and memory studies and contributes another perspective to the multidisciplinary understanding of the role of ethnic ancestry in the US. Intergenerational memory in narratives provide the organizational structure and language, moreover, one of the underlying assumptions of the research. Fodor connects her research to Marianne Hirsch’s notion of postmemory. “Postmemory describes the relationship that the second generation of survivors bears to the personal, collective, and cultural trauma of those who came before” (Hirsch 5). However, these experiences were transmitted to them so deeply and affectively that they constitute memories in their own right (Hirsch 5). They remember only through the stories, images, and inherited behaviors and memories. According to Fodor, the concept of postmemory and intergenerational memory overlap in many aspects (27). Story-telling is an act of meaning-making to resolve trauma or conflicts and serves as a means for community formation and ethnic subjectivity (28). Intergenerational memory refers to intrafamilial events that were experienced by a previous generation. Further generations can only access them through mediated personal narratives of the previous generations (27). This collective memory shaped by public history and culture influences these recollections (Fodor 27). Fodor argues that “subjectivity” is often conceptualized comparable to “identity” and uses the term of “subjectivity to refer to the complex portrait of the self we construct in the language of stories” (29).

Fodor’s research on the narrative meaning-making of these personal histories reveals that we are exposed to the fragmented or untold intergenerational narratives that circulate and persist in our everyday choices and commitments (11) and challenges us to reconsider them based on our individual and collective interpretations. Ethnic Subjectivity in Intergenerational Memory Narratives proves to have a solid and impressive interview-based research database with excellent research questions. The volume is eloquently written and enjoyable reading with fascinating life-stories researched and analyzed with up-to-date and novel interdisciplinary terminology and theories embedded in a thought-provoking critical way of thinking. Ethnic Subjectivity in Intergenerational Memory Narratives is an inspiring and functional re/source for students and scholars interested in current trends of US ethnic studies.