Szabó Helga is a PhD student at the Doctoral School of Literary Studies, University of Szeged. Her doctoral research is focused on American film criticism especially in the era of the internet. Her other research interests are the American film and media studies. Email: 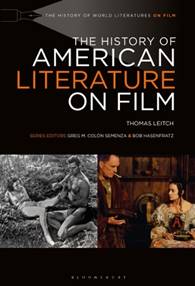 A plethora of studies and books discuss the relationship between literature and American film adaptations. The History of American Literature on Film (2019), written by Thomas Leitch, an American film scholar and author of several books on film studies is a novel book that excels through its spectacular writing that not only investigates the history of Hollywood’s adaptations providing also a detailed and well-written guide that invites readers to dig under the surface of Hollywood filmmaking. Leitch uses a witty and yet friendly voice while composing his book, which makes The History of American Literature on Film a widely accessible text for both academic and non-academic readers.

In the first chapter, titled “Introduction: American Cinema and American Literatures” Leitch addresses the issue of American cinema having less literary adaptations than other countries (like, for example, England). An important thing to note in the light of the above-mentioned lack is also is that the volume focuses mainly on mainstream Hollywood adaptations of American literary works and, as such, does not include adaptations from abroad. The author provides in this chapter a 15-point guide for his argument; moreover, instead of designating the framework of the book, here the author faces the reader to the main theme directly by claiming that his intention was not “to emphasize adaptations of canonical literary texts,” nor “to provide close readings to the films [he] chose to discuss” (26), proving this book rather one that can be described as the author’s subjective remapping of his studies he did on film through decades of research.

Leitch divides his book chapters based on decades. The second chapter thus, “[…] The Attraction of Adaptation”, embraces the time period of 1895-1915 where Leitch introduces not only well-known adaptations (such as D.W. Griffith’s The Birth of a Nation) but also brings into focus other milestone works of filmic art which are not so well-known by the audience—like Cecil B. DeMille’s The Cheat (1915). Leitch highlights the innovative value of The Birth of a Nation by naming scenes from the movie that added "new elements to a familiar story" such as “the clansman” or the “manslaughter” (73). He also gives an idiosyncratic introduction to the “adaptation as attraction” by dedicating a subchapter to the concept. In this subchapter, Leitch elaborates on the thought that the response of a film adaptation entirely depends entirely on whether the audience is aware of the literary piece the movie was adapted from and quotes Tom Gunning, who called certain adaptations “attractions” based on the novel entertaining elements they contained. Leitch here enlists the plays which were most likely to be adapted to the silent screen: mainly Broadway hits like Margaret Mayo’s Baby Mine (1910) and Polly of the Circus (1907), to name just a few. In line with this thought, a subchapter of the second chapter is about the film adaptations of L. Frank Baum’s children’s book, The Wonderful Wizard of Oz (1900), which can be considered the first successful fictional franchise with its two sequels, The Marvelous Land of Oz (1904) and The Ozma of Oz (1907).

Through the third (1915-1927), fourth (1927-39) and fifth (1939-51) chapters, Leitch turns his attention towards the sound era where he talks about the concept of the “exotic movie,” including Uncle Tom’s Cabin, Regeneration and Where are my Children?. Leitch gives credit at this point, too, to D. W. Griffith’s The Birth of a Nation (1915) by calling it a movie that “changed the game for Hollywood” (71) since it displays a new kind of movie content in the light of previous cinematic representations, which he labels as “exotic” in the sense of including more races, cultures, subcultures as well as religious groups. Further on, Leitch follows in an ordered, chronological manner, writing about the 1930s as an era when movie studios controlled the production, the distribution and the exhibition of their films. These studios showed little interest in being faithful to the work they adapted unless it was a “wildly successful novel whose readers would be outraged by any changes” (112) because before the 1930s, Broadway adaptations of plays enjoyed greater popularity with the American public than the adaptations of novels. In this sense, the 1930s showed indeed a shift from theatrical adaptations to the adapting of novels; this was, for example, the case of a best-seller book that became the multiple Academy-Awarded Gone with the Wind (dir. Victor Fleming, 1939).

The sixth, seventh and eighth chapters are the chapters where the book’s author goes through the main changes in Hollywood that were triggered by various negotiations with the Production Code, the rising popularity of the television and, last but not least, the rising interest in adapting more novels such as John Steibeck’s East of Eden (1952) and Ernest Hemingway’s The Snow of Kilimanjaro (1936). For Leitch the most crucial changes were in the display of more explicit content, for example characters from darker backgrounds and of various races and cultures. Leitch calls this time of Hollywood’s adaptations the time of the “weaponized bestsellers” since filmmakers adapted novels with daring content, like Harold Robbins’s Carpetbaggers (1961). In 1968, the Production Code Administration (which was a strong censoring office) fatally weakened and the Motion Picture Association took its place (the latter being a system that rates films putting them into different age categories based on the contents they display). In the seventh chapter of the book the focus is on different countercultures that shaped both music and film industry in the sixties and seventies. Leitch enlists these counterculture groups in the context of filmmaking and emphasizes the fact that it was quite difficult for filmmakers to adapt the aim of these cultures to Hollywood’s mainstream narrative films. However, he also writes that the “unadaptability of counterculture” was, at the same time, “one of its most appealing features of filmmakers planning their own adaptations” (238) and concluded that the success of the counterculture adaptations between 1967 and 1975 fundamentally changed the way in which Hollywood approached adaptation in particular such as was the case of Hair (dir. Miloš Forman, 1979) and Candy (dir. Christian Marquand, 1968) (240).

The eighth chapter, “1975-89: Screening the Silenced,” is the last chapter of the book and is one that investigates solely the 20th century Hollywood cinema. Leitch writes about movies which started to display minority subcultures and their members like The Miracle Worker (1962) and The Color Purple (1985). Hollywood moviemakers started to embrace one specific group, the African Americans, which meant that works displaying black actors in protagonist roles, as, for example Sidney Poitier, became “increasingly prominent and admirable in film adaptations” (269); such movies were Lilies of the Field (1963) and In the Heat of the Night (1967). Here, Leitch pays special attention to the role and representation of African Americans and emphasizes the adaptation of Ernest Tidyman’s novel Shaft (1970), which was adapted into film by the director Gordon Park. The reason this movie deserves special attention is because Park changed the representation of the main character’s race. Besides Shaft, Leitch brings many other examples for the African Americans representation in film by talking about the phenomenon of “Blaxploitation” where African Americans are portrayed as protagonists and not sidekicks, victims or villains. The first half of this chapter is dedicated to the African American experience and the second half to the second-wave feminism in the US, as well as to the displaying of disabilities on the screen along that of gay or lesbian characters. Leitch singles out Barbra Streisand, “the dominant character in the cycle of second-wave feminist cinema,” who “had become increasingly outspoken as a critic of the limits Hollywood placed on women’s roles” both on and off-screen (278) and closes his chapter with writing about short stories and their film adaptations with specific, adult content.

The last two chapters of the book treat more contemporary movie adaptations. The ninth chapter introduces the science-fiction films that gained popularity especially in the 1970s and 1980s with the Alien or the Star Wars franchises but Leitch chooses to discuss earlier adaptations of science fiction, among them Flight to Mars (1951) and The Thing from Another World (1951). Besides science-fiction, Leitch devotes a good proportion of his text to the contemporary rising popularity of comic books, which provide the base of franchise stories for further Hollywood adaptations—instead of the best-selling novels or plays. What is more, Leitch even says that among these comic books the Batman franchise “has become a canon without a center, a status it shares with virtually every other comic book franchise” (315) and continues with the discussion of contemporary superhero movie adaptations or re-adaptations such as Batman, Superman, Spiderman or the Avengers. Leitch starts his last chapter, “2007-2018: Entertainment for me,” with a discussion on Philip Roth’s novels that were rather difficult to adapt, particularly addressing that of The Human Stain (dir. Robert Benton, 2003) which turned out to be a box office failure in the end and questioning the issue of successful novel adaptations in the third millennium. Nowadays, comic book adaptations are the leading genre of Hollywood and Leitch sees this as a new era which can actually close “the long history of Hollywood’s dependence on literary adaptations” (349). However, the question of fidelity of adaptation remains an important issue in case of comic book adaptations as well since superhero movies do not follow the original plotline and thus can be rather called ‘reboots.’
Leitch closes this part of the book with talking about the phenomenon of the “entertainment for me” by stating that the main problem of the twenty-first century filmmakers—and he refers here to Hollywood—is that the youth audience becomes less and less interested in the classical cinema-going due to the rising popularity of social media and especially of the movie platforms like Netflix. The concept of “entertainment for me” according to Leitch is that “the look and sound of the program material matters much less to these viewers than the ability to consume it on their own terms” (366) and concludes with bringing Stephen King as the true example of this new type of entertainment.

The History of American Literature on Film undertakes the task of giving an informative model of Hollywood cinema from 1895 to 2018 by examining not only major cinematic adaptations but also by writing about the various changes in Hollywood (the shifting to the sound system, the main filmic regulations, the different genres and sources of adaptation which were favored through the decades), all in the mirror of American literary works. The volume has a unique kind of wit and a stylistic vigor that not only informs but also entertains the reader, giving a rich insight into the literary background(s) of Hollywood cinema making it an important contribution to contemporary film studies in general and to American film in particular, a book that can also serve as a useful source for those interested in the adaptation of American literature to the silver screen.