Zsanett Varga is an MA student at the Department of American Studies, Institute of English and American Studies, University of Szeged. Her research interests include gender and film studies with special focus on experimental and independent American cinema. Email: 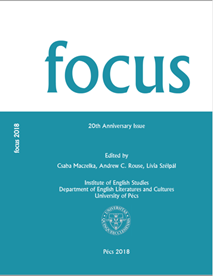 This 20th anniversary issue of FOCUS: Papers in English Literary and Cultural Studies is published by the Institute of English Studies, Department of English Literatures and Cultures, University of Pécs, includes a wide variety of essays that cover a plethora of issues related to American and British literature, theater and cinema. The editor-in-chief, Mária Kurdi emphasizes in the “Preface” the fact that this anniversary edition reflects the general direction “FOCUS has been following during the last two decades” (p.5). The articles on literature investigate the dimensions of literature and culture in 18th century England and range from early roles of women in the sphere of production and publishing of ballads to a meticulous analysis of Sterne’s The Sermons of Mr. Yorick and conclude with an analysis of street ballads; the essays on cinematic representations focus on various aspects of American fiction, drama and film that gravitate around concerns regarding integrity, crisis, and humanity, while the section on American drama and Irish theater concludes with two reviews on books about Arthur Miller and British postmodern theater, respectively.

The first three essays of the anniversary issue form a section on British culture and literature that focus on 18th century British ballads seen from three different angles. The issue’s and the section’s opening essay, “Women and the Ballad Trade in Eighteenth-Century England” (pp- 15-26) authored by David Atkinson, is an investigation of 18th century British women’s roles and their unexpected roles and efforts in the marketing of ballads (both publishing and selling). by “interrogating some contemporary visual and literary representations of ballad women” (p.15). This novel research not only provides an insight into ballad repertoires but also challenges the biased image of women of the period. The second essays, “‘The First Will Serve the Bookseller’s Purpose:’ Sterne’s Double Title Page in The Sermons of Mr. Yorick” (pp. 27-44) by Gabriella Hartvig, follows in this section with an analytical comparison between Laurence Sterne’s The Life and Opinions of Tristram Shandy, Gentleman and his book of sermons, by pointing out how these two different writing styles interestingly manage to reflect on one another. What makes this essay particularly intriguing for the twenty-first century reader is the numerous snippets and advertisements brought as examples from various newspapers of the time that make the analysis into a useful time-machine allowing readers to sneak back into the 1760s atmosphere. The third essay in this section is Andrew C. Rouse’s “‘Hark! I Hear the Cannons Roar:’ Twenty Years in the Life of a “New Tune,” (pp. 45-56) which discusses various variations of tunes that first appeared in an English street ballad in connection to the defeat of the Ottoman Army in Vienna.

The second section of this anniversary FOCUS issue deals with American fiction, drama, and film. The first essay, authored by Ljubica Matek and Jasna Poljak Rehlicki, “The (Im)Possibility of Academic Integrity in John Williams’s Stoner,” (pp. 57-72) deals with a new type of tragic hero that appears in William’s 1965 campus novel. Through the discussion the focus is on the character’s dilemma whether in that day and age can one maintain a humanist way of thinking or that becomes impossible—and if so, how. The next article of the second section is László B. Sári’s “Crisis and Literature: Future Imperfect, or the Case of Don DeLillo’s Cosmopolis” (pp. 73-80). Here Sári argues that the reason Cosmopolis (2003) was praised by many scholarly commentators has been arguably for the same reasons for which it was criticized when it appeared, emphasizing the text’s embodiment of ideas connected to the “white male body and terrorism in a curious temporal structure” (p. 74) that catches the discourses surrounding the end of the Cold War and the beginning to the Age of Terror.

The third section of this volume focuses on American drama and film. This part opens with Lenke Németh’s “Legacies of the Past and the American Family: Sam Shepard’s True West and Suzan-Lori Parks’s Topdog /Underdog” (pp. 81-94), which conducts a comparative analysis of True West (1980) and Topdog /Underdog (2002) concluding that despite the respective differences in the playwrights’ background, both use similar dramaturgical devices that concentrate on the “lack of a functional past and sense of homelessness” (p. 92) for the characters with disrupted families whose members end up “shifting identities” (p. 83). The third section’s second article focuses on film. Réka M Cristian’s “Journeys Into Night: Agewise Cinematic Constructions in Cas and Dylan and Our Souls at Night” (pp. 95-104) investigates two North American movies, the Canadian Cas and Dylan (2013, directed by Jason Priestley, with Richard Dreyfuss and Tatiana Maslany in leading roles) and the US-produced Our Souls at Night (2017, directed by Ritesh Batra, featuring Jane Fonda and Robert Redford). Cristian talks in detail about the ways in which the filmic representation of senior citizens, members of the North American Baby Boomers generation, is challenging contemporary cultural myths of aging through various acts of performativity by dismantling ageism in many ways, but always connected to certain rites of passage (intergenerational dialogue of death and birth in Cas and Dylan and the same-generation dialogue of “nuptials” in Our Souls at Night).

The fourth section of the anniversary issue features Bence Gábor Kvéder’s “The Witness, the Silenced, and the Rebel―Women in Search of Their Voice: Female Characters in Brian Friel’s Translations and Anne Devlin’s Ourselves Alone” that emphasizes the “importance of Friel’s ‘heroines’ as prototypes and forerunners of the ideas embodied by Devlin’s three female protagonists” (p. 107). Even though these characters are not from the same time period, they are still used in both plays to depict the situation of women and their (dis)abilities, as well as on the (im)possibilities of the creation, identification, representation and protection of the individual self through social and cultural traumas of Irish history. The fifth section is the “Interview” part of the volume. Here is the transcript of Mária Kurdi’s fascinating talk with Irish playwright Deirdre Kinahan (pp.125-136), who has written several socially oriented and formally experimental plays substantially enriching contemporary Irish theatre. Among intriguing information concerning the topics and the inspiration of her works (some already translated into Hungarian), the interview concentrates on the author’s latest play, Rathmines Road, that initiated various critical conversations and debates after its debut at the 2018 Dublin Theater Festival.

The last section of the volume is the “Reviews” part with the first in this issue authored by Lívia Szélpál on an e-book entitled “Arthur Miller öröksége: Centenáriumi írások műveiről [The Legacy of Arthur Miller: Centennial Writings on His Works], edited by Mária Kurdi (pp.139-144). The e-book’s critical essays focus on Miller’s oeuvre, bracing new critical perspectives. Szélpál points out that the essays rethink many of the persistent themes of Miller criticism including the issue of anti-Semitism, the family play paradigm and the memory play, the narrative techniques of the absurd drama and the intercultural relationships of the American and Irish theatres, all in an ingenious manner, challenging and transgressing former assumptions and calling attention to current, potential areas of research that can rise from the American playwright’s complex thespian world. The 20th anniversary issue of FOCUS closes with a review (pp.145-149) on Cristina Delgado-García’s Rethinking Character in Contemporary British Theatre: Aesthetics, Politics, Subjectivity (2015), written by Mária Kurdi. The readers can learn that Delgado-García’s book is informed by relevant theoretical assumptions and offers a viable methodology for addressing highly experimental contemporary plays. Moreover, Delgado-García takes on board the ideas of and argues with a number of theatre scholars from France and Spain in order to contest the limiting categories of Anglo-American scholarship on the dramatic character, which results in a study governed by a critical position open to interdisciplinarity (p. 149).

In sum, this 20th anniversary issue of the FOCUS: Papers in English Literary and Cultural Studies carefully edited by Csaba Maczelka, Andrew C. Rouse and Lívia Szélpál offers an engaging selection of essays that shift from covering topics on literature and culture to theater and cinema. With the essays smartly structured around these topics touching upon issues from women’s social roles and positions in 18th century to North American cinematic representation and the contemporary state of British theater, this volume of FOCUS offers its readers an engaging, relevant, and up-to-date take on the field of English and American Studies.