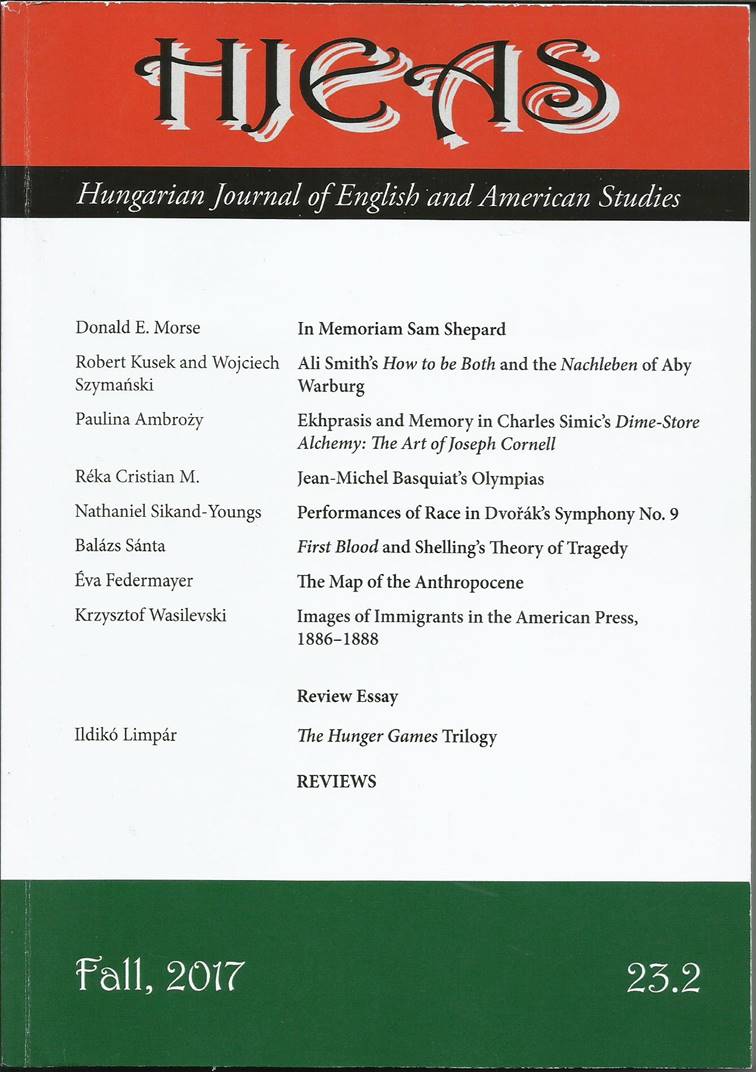 The Hungarian Journal of English and American Studies (HJEAS), Fall, 2017, Volume 23 Number 2 is an intriguing collection of essays framed by a tribute to the memory and legacy of playwright Sam Shepard (1947-2017). Shepard was an intuitive writer, musician, director, charismatic actor and innovative playwright, who was thinking in images and music and used these in their continuity and dynamism to present the changes in the world. He was the first American playwright putting into service various manifestations of popular counter-cultures such as contemporary graphic and dance arts, film and rock music and creating a peculiar sense of a dramatic world in which emotions are visualized with the help of uncommon images and rhythms (Bollobás 567).

This volume includes seven critical essays focusing on “inter-artistic connections” in various fields such as fiction, poetry, film, and visual arts, history, culture, and music, which, as Lenke Németh writes in the editor’s notes, open up “new vistas for interdisciplinary investigations and enriching the thematic and conceptual arsenal of literary studies” (Németh 253). Nevertheless, the strength of the volume lies not only in the content but its interdisciplinary approach bracing new critical perspectives that indirectly reflect the legacy of Shepard’s interdisciplinary artistic method. Therefore, the Barthesian unity of the image/music/text (Barthes 25-26) frames the methodologic approach of the collection, which discusses a wide variety of themes, all pointing out key notions and frameworks of analysis. What it may count as both the flaw and also as peculiarity of this top-quality volume is that the range of essays does not follow a thematically structured line.

Donald E. Morse, as the Editor-in-Chief of the HJEAS, presents his introductory essay “In Memoriam: Sam Shepard (1943-2017)” pays tribute to the American playwright by discussing the functions of the magical and unconventional visual and aural images in four notable plays (Curse of the Starving Class, Buried Child, True West, and Ages of the Moon) from across Shepard’s career (Németh 253). Morse relies on Christopher Shinn’s observation that Shepard’s genuine contribution to the field is in creating a “zone of trauma, mystery and grief” in his plays, which remains, as the author notes, the playwrights’ legacy for the contemporary and future theatres (Morse 261). Morse’s brief introductory article is followed by three papers on various fields of visual arts, two essays on music and film, respectively, and two articles on the reinterpretation of the American sociopolitical system. The volume concludes by a review essay by Ildikó Limpár and ten book reviews by Mária Kurdi, Zsolt K. Virágos, Judith Szathmári, Anna Kérchy, Balázs Venkovits, Kata Anna Váró, Imola Nagy-Seres, Emma Bálint, Máté Gergely Balogh, and Georgina Bozsó.

The first essay in the collection is “Ali Smith’s How to be Both and the Nachleben of Aby Warburg: “Neither Here Not There,” written by literary critic Robert Kusek and art historian Wojciech Szymański. The essay presents the Scottish author, playwright, academic and journalist Ali Smith’s 2014 novel How to be Both, in the context of dual narration and Aby Warburg’s iconological interpretations of the frescoes by Francesco del Cossa in the Pallazzo Schifanoia in Ferrara as an urtext of narration with Warburg’s theory of reading images proving to be one of the major sources of inspiration for Smith’s narrative (Kusek and Szymański 445). The authors conclude that “Smith’s novel is a proof of not only the critical/artistic potential of Warburg’s concept of Nachleben, but also of the validity of the critic’s theoretical and interpretative model” (Kusek and Szymański 279). The second essay “The Third Image:” Ekphrasis and Memory in Charles Simic’s Dime-Store Alchemy: The Art of Joseph Cornell written by Paulina Ambroży is focusing on the works of the Serbian-American Charles Simic (1938-) and the surrealist American visual artist Joseph Cornell (1903-1972). This is yet another interesting comparison with Shepard’s oeuvre—since Cornell was also a self-taught artist, like the American dramatist. Simic’s ekphrastic poetry manifested in his collection of prose-poems, Dime-Store Alchemy: The Art of Joseph Cornell (1999), which stand in the focus of Ambroży’s analysis. According to Ambroży, Simic’s “visual poetry” serves as “the third image,” in which “art historical discourse and ekphrasis are reinvented and transformed into a new poetic rhythm” (445). Moreover, the encounter with Cornell’s artistic shadow boxes makes Simic revisit his personal history in the back of the collective memory, haunted by the traumatic childhood memories from war-torn Serbia (445). As the author of the article concludes, “Cornell’s desires, fantasies, and memories, creatively evoked through ekphrasis, are strongly interwoven with Simic’s mnemic matrix” (Ambroży 303). As such, the “third image” concept, created by Simic to represent Cornell’s shadow boxes as instruments, serves as a screen for the projection of verbal and visual representations of Simic’s own consciousness and fragmented selves (Németh 254). Réka Cristian’s essay “The Art of Erasure: Jean-Michel Basquiat’s Olympias” is a genuine contemporary rhetorical reinterpretation of the ut pictura poesis tradition. Cristian presents the artistic work of the Brooklyn graffiti artist, the widely acknowledged enfant terrible of the New York art world, Jean-Michel Basquiat (1960-1988), who had not been in the limelight before in Hungarian American studies. Cristian discusses the visual shift of race and gender representation in her perceptive analysis by arguing that two of Basquiat’s paintings Three-Quarters of Olympia Minus the Servant (1982) and Untitled (Maid from Olympia) (1982) reinterpret Édouard Manet’s Olympia (1863) by erasing racial difference and questioning gender stereotypes in the lack of gender markers (Cristian 446). The essay emphasizes the “visual story of equally important colors and races in contemporary visual arts” (Cristian 315) and claims that Basquiat’s Three-Quarters of Olympia Minus the Servant “erased the black figure from the binary set-up of a modernist context in order to remove any trace of racial difference.” Meanwhile, Untitled (Maid from Olympia) deleted the white figure but placed the African maid at the center along with all colors and races present in the field of vision” (Cristian 315). As a result, the servant, a formerly colonized subject “talks back” in a visual narrative serving as a critique of colonization (Cristian 446).

Nathaniel Sikand-Youngs’s ‘“Another spirit, other thoughts, another colouring:’ Performances of Race in Antonín Dvořák’s Symphony No. 9 From the New World” discusses the Czech composer’s Symphony No. 9 in E minor (From the New World), he composed in 1893 while serving as the director of the National Conservatory of Music in New York City. This essay won the British Association of American Studies Ambassador’s Award for American Studies in the category of Best Undergraduate Essay. Sikand-Youngs argues that Dvořák with his composition intended to present the character of the US and the impact of Native American and African American traditions on its musical vernacular (Sikand-Youngs 327). Therefore, contrapuntal readings of the complex emotions transmitted by music aims to reveal “not only Dvořák’s impressions of Native and African American peoples but also his broader understanding of the nation” (Sikand-Youngs 327). Balázs Sánta in his essay on “Action Hero vs. Tragic Hero: First Blood, Cultural Criticism, and Schelling’s Theory of Tragedy” analyzes Ted Kotcheff’s 1985 evergreen film, First Blood, the first piece of Sylvester Stallone’s Rambo series “from the perspective of dramatic structure as conceived in Schelling’s concept of tragedy and Schiller’s notion of the sublime” (Sánta, 447). Sánta reinterprets the notion of the hero and presents the paradigm change of the “Hollywood’s male-gendered stock figure of the action hero and the more complex character of the tragic hero, familiar from classical drama” (447).

The final two essays of the volume are focusing on the peculiar interpretations of the American sociopolitical system. Éva Federmayer’s article “Migrants and Disaster Subcultures in the Late Anthropocene: An Ecocritical Reading of Octavia Butler’s Parable Novels” presents an ecocritical interpretation of Octavia Butler’s novels Parable of the Sower (1993) and Parable of the Talents (1998) (Németh 255). Federmayer argues that Butler’s Afrofuturist Parable novels, present the dystopian vision of a disintegrating US society in the period between the 2020s and the 2090s, which is disunited by internal and external anarchy and “make up the fictional tapestry of the human risk narrative whose anthropogenic effects on the planet might threaten an ecological holocaust” (Federmayer 347). On another kind of historical note, Krzysztof Wasilewski analyzes the issue of anarchy from a historical perspective in “The Image of Immigrants as Anarchists in the American Press, 1886-1888.” Wasilewski scrutinizes the American press coverage of anarchism between 1886 and 1888. According to the author, as a result of the Haymarket riots of 1886 in Chicago, nativism and collective scapegoating became persistent tropes in US newspapers with anarchism became widely considered as a foreign ideology connected to immigration which allowed “American newspapers to maintain their role as one of the pillars of the social, political, and economic system in the United States” (Wasilewski 382). Wasilewski relies on the notions of the libertarian press and René Girard’s concept of the scapegoat and uses the method of critical discourse analysis as a framework for his research. The essay section of the issue completes with a review essay written by Ildikó Limpár on Suzanne Collins’s The Hunger Games trilogy (2008-2010). Limpár scrutinizes four collections of articles published by McFarland and argues that these volumes prove the necessity of such critical material not limited to scholarly research (Németh 256). According to Limpár, The Hunger Games series, “exceeds most representatives of Young adult dystopian fiction, therefore, it appears to be one of the best tools that the Young Adult literary market offers at the moment for such a purpose” (Limpár 395).

This volume of Hungarian Journal of English and American Studies is a valuable and refreshing contribution to the current researches in English and American studies, an intriguing collection of interdisciplinary texts that can be useful for undergraduate and graduate students, for teachers and academics but also for a more general readership.