Lívia Szedmina holds a PhD in American Studies (2015) from Eötvös Loránd University, Budapest. Her dissertation focuses on the life and work of the Fenian John Devoy. She currently works as a technical English language teacher and international relations coordinator at Subotica Tech – College of Applied Science. Her professional interests include Irish culture and history, specifically 19th-century Irish-American and Fenian history. She has held guest lectures on Irish culture and history at universities in Belfast, Graz, Ljubljana, Cluj, and Komarno. Email: 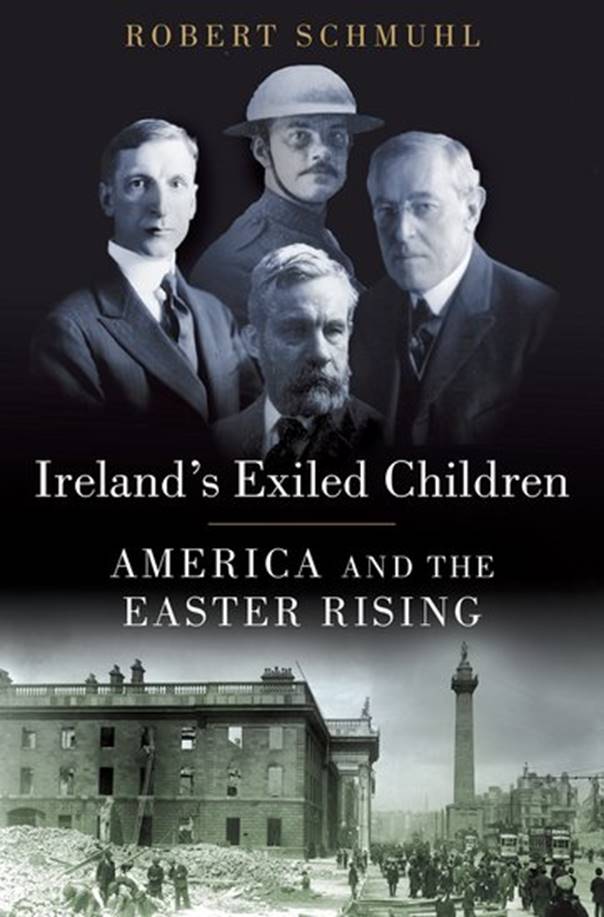 “What’s so American about Irish independence” could have served as the title for the illuminating study Ireland’s Exiled Children by Robert Schmuhl. The actual title is, in fact, a quote from the Proclamation of 1916. Schmuhl is a Professor of American Studies and Journalism at the University of Notre Dame, one of the major Irish studies centers in the United States. He sets out to map the complexities of Irish and American relations as a backdrop to the Easter Rising of 1916.

Robert Schmuhl’s work is a welcome addition to a field covered rather scarcely by the scholarly community in the run-up to the 1916 centenary. Ireland’s Exiled Children offers a much-needed examination of the Easter Rising from an “American” perspective. Here, the word American is to be taken in the widest of senses, including financial, organizational, Fenian, as well as to a certain ‘moral compass’ sense, as demonstrated by the four cornerstone figures the narrative is based on: John Devoy, Joyce Kilmer, Woodrow Wilson, and Éamon de Valera. The book contains four chapters, each concentrating on one of the abovementioned people and their contributions and reactions to the Rising.

The first key character to be introduced, under the chapter heading “Intrigue of Exile,” is John Devoy—rebel, journalist, fundraiser, organizer, and greatest Fenian of all, whom all the great Fenians of the age looked to, as well as looked up to. Devoy, a native of County Kildare, represents the driving force behind the Irish-American organization Clan na Gael, a Fenian organization that worked towards organizing another Fenian rising or to fund the struggle for Irish independence. His ceaseless organizational and fundraising work was indispensable in ensuring the financial background for the Rising. Moreover, Devoy was often seen as a sort of a moral compass, whom avid Irish nationalists and quiet Irish-American sympathizers equally turned to, both prior to and after the Rising. Devoy never saw himself as an American, as demonstrated by Devoy’s reaction to the occasion when he was accused of “dictating” i.e. forcefully influencing events from America: “These gentlemen must pardon me if I respectfully refuse the honor of being classed as an American” (Golway 11). However, the fact remains that he was a naturalized citizen and had an uncanny ability to sense when he could freely support his country of birth, and when he had to stand up and sing the American anthem. Nonetheless, as Schmuhl points out, Devoy was granted what Joyce Kilmer was not: after a lifetime spent in service of the struggle for an Irish independence, he lived to see the birth of an independent Ireland.

Joyce Kilmer might seem a surprising choice in a book focusing chiefly on Irish history, as Kilmer had no Irish ancestors, yet his “adopted ethnic identity,” as formulated by Kilmer’s descendants, was Irish (59). Kilmer was not only a journalist and an editor, but also the author of a famous—though rather bad, Schmuhl claims (60)—short poem titled “Trees,” as well as a poem written about the sinking of the Lusitania. He was close to Joseph Plunkett, a future participant and martyr of the Easter Rising, during Plunkett’s stay in New York in 1915. Plunkett represents Kilmer’s connection to the Easter Rising, which was, in Kilmer’s words, a “poets’ revolution” (69). If one had to pinpoint the common characteristic between Devoy and Joyce Kilmer, it would probably be their understanding of the power of words. Kilmer’s writings were vital, because British censorship made it difficult to gain reliable news of the events in Dublin. Like Devoy, Kilmer also sought to inform and to a certain extent form—‘forming’ being a specialty of Devoy’s editorials published in his journals Irish Nation and The Gaelic American—the opinion of the public about the events of the Easter Rising. Schmuhl juxtaposes Kilmer’s role as a contributor to The New York Times with his difficulties with British censorship in reporting about the events in Dublin. His reporting on the Rising posed a valuable source of information for the American public, especially the Irish-American community. Neither Devoy nor Kilmer took part in the armed rebellion, but they both believed in the power of physical force to achieve Irish independence. When the United States entered the First World War, Kilmer enlisted and fought on the European front, where he was killed in battle. Kilmer’s comrades in battle remembered him for his vast knowledge of Irish songs, whereas literature scholars remember him for his poems about the sinking of the Lusitania and the Rising. Indeed, Kilmer lived, wrote, and reported on the “Romance of Exile,” as the title of the chapter also suggests.

Woodrow Wilson was undeniably the key figure in the political events of the era, and his “Denial of Exile” and his supercilious attitude towards the Irish-American community directly impacted the fate of the newly-proclaimed Irish Republic. Prior to his election as president, Wilson was an author, historian, political scientist, and president of Princeton University. He served two terms as president of the United States of America, during the Easter Rising and the First World War. He also fostered a deep mistrust towards the “hyphenated Americans”—including the Irish-Americans and German-Americans—, which remained visible through his entire presidency and had bearing on his decisions during the Paris Peace Conference. In spite of his staunch belief that there can be no dual loyalty to both the United States of America and one’s country of birth, Wilson understood the need for the Irish vote in large cities with a sizable immigrant community. Schmuhl highlights the fact that Wilson did his utmost to remain neutral on the issues that the Irish-Americans expected him to support them on, though he was seemingly understanding to the pleas of the Irish-American community calling for the US to weigh in on behalf of the newly-proclaimed Irish Republic. Wilson needed the Irish-American vote, thus remained neutral on the outside, yet offered no actual political assistance so as to not come into conflict with the UK. Still, regardless of the fact that the only state singled out in the Proclamation of the Republic, read out in front of the GPO in April 1916, was the United States, Wilson refused to use his country’s influence to promote the case of Ireland. At the Paris Peace Conference, he completely disregarded the voices calling for the recognition of an independent Ireland, which was in stark contrast to his rhetoric of self-determination for the people of Poland and Czechoslovakia. However, Wilson’s outward neutrality and private mistrust—he found the Irish “untrustworthy and uncertain” (100)—led to another instance of “denial:” it cost Wilson the Irish vote in support of the ratification of the League of Nations.

The fourth section is about Éamon de Valera, one of the Easter Rising rebels, who escaped execution to become the president of Ireland. There was a visceral bond between Ireland and the United States that was perceived by the communities on both sides of the Atlantic. On one side, there was Woodrow Wilson, an American with Ulster Protestant roots, who considered the case of Ireland a domestic issue; on the other side, there was Éamon de Valera, the personification of the “myth of exile.” A man with a rather complex background, he fostered the image of his Irishness and participated in the Easter Rising. It is popularly believed that his life was saved at the last minute, due to his being an American citizen. Éamon de Valera dominated the Irish political scene for the majority of the 20th century. Born in the United States, his father was Spanish and his mother Irish. He was raised by his Irish grandmother on the West Coast of Ireland. Even so, de Valera’s American citizenship has long been understood as the prime reason for having been saved from execution by the British. Schmuhl dedicates this fourth section to untangling the various records of why de Valera escaped execution, including British military correspondence and de Valera’s own statement, written in 1969. According to Schmuhl’s conclusion, the fact that de Valera was born in America cannot be taken as sufficient cause for canceling the execution. The reason lay in de Valera’s late capture during the Rising and the turn of public opinion both in Ireland and the United States, triggering the British to call off the execution. In fact, the last chapter circles back to the first by linking Éamon de Valera to the Rising that Devoy had helped finance.

Schmuhl’s engaging study offers an intriguing insight into the transatlantic dimension of the Easter Rising, elaborating on the substantial financial, moral and organizational influence of the Irish-American community. With its 232 pages, the book is fairly short, given Schmuhl’s deep knowledge of his subject, amassed over a decade-long research period. The book contains a highly valuable collection of sources and selected bibliography. It can safely be said that Schmuhl’s book is an enjoyable read and a treasure-house of information for scholars and non-academic readers alike. This work is likely to become a standard reference book on the American and Irish-American aspect of the Easter Rising and its impact for future researchers and readers interested in Irish and American history.