András Lénárt is senior assistant professor at the Department of Hispanic Studies, University of Szeged, Hungary. He holds a PhD in Cotemporary History. His research interests include Spanish and Latin American history and cinema, the relation between film studies and universal history, as well as Inter-American studies. Lénárt is the author of two books and the co-editor of several volumes. His book chapters, essays and articles have appeared in Spanish, Hungarian, British, Italian, Mexican, German and Canadian journals, volumes of essays and books, and also on the website of the US Library of Congress, National Film Registry. He is currently the president of the International Federation of Latin American and Caribbean Studies (FIEALC) and is member of various international research groups and associations, such as the Association for Spanish Film Historians, the Association for European Historians of Latin America (AHILA), and also of the General Assembly of the Hungarian Academy of Sciences. He is also founding member of the Inter-American Research Centre at the University of Szeged. E-mail: 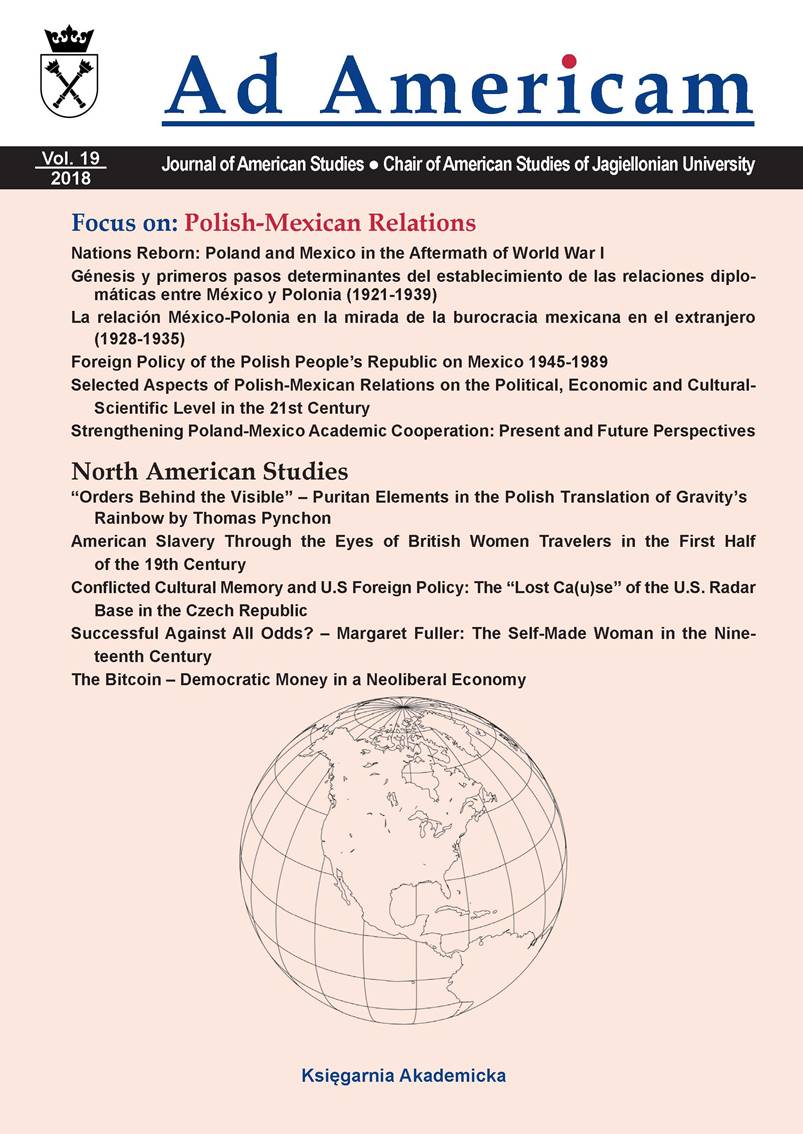 Ad Americam. Journal of American Studies is an interdisciplinary journal published once a year at the Institute of American Studies and Polish Diaspora, Jagiellonian University, Krakow, Poland. As its name implies, this journal prints peer-reviewed articles on North and Latin American history, culture, sociology and comparative studies. Its recent issue, Vol. 19., delivers also a special, Inter-American aspect: the first part of six articles written both in English and Spanish focus on Polish-Mexican relations, while the second part’s five essays center around North American studies.

The first part of Ad Americam provides a detailed and well-researched overview on the relations between Mexico and Poland in the 20th century, more specifically, between the end of World War I and the present. In “Nation’s Reborn: Poland and Mexico in the Aftermath of World War I,” Karol Derwich underlines the two countries’ similar conditions at the beginning of the 1920s: Poland had just regained its independence and the Second Polish Republic was born, while Mexico’s history stepped on a new path after the revolution of 1910-1920. This comparative article also serves as an introductory text that explains what happened in these countries during the first two decades of the 20th century, prior to the establishment of diplomatic relations between Poland and Mexico.

The following two articles of the volume are written in Spanish: Marcos Moloeznik’s “Génesis y primeros pasos determinantes del establecimiento de las relaciones diplomáticas entre México y Polonia (1921-1939)” and Abraham Trejo Terreros’s “La relación México-Polonia en la mirada de la burocracia mexicana en el extranjero (1928-1935). They are followed by Marcin Fatalski’s “Foreign Policy of the Polish People’s Republic on Mexico (1945-1989),” in English. All three essays analyze various stages of the establishment and progress of bilateral relations ranging from the 1920s until the end of the 1980s. Moloeznik also mentions the obstacles Poland and Mexico met in the course of establishing various the diplomatic negotiations during the military occupation and division of Poland by the Nazis and the Soviets in the World War II, and also Mexico’s improving diplomatic relations with the Soviet Union. Nevertheless, the first steps in the establishment of diplomatic relations between Poland and Mexico were characterized by their shared interests and by the common struggle in order to obtain recognition as sovereign states. Terreros’ article examines the interwar period through the diplomatic reports written by the representatives of Mexico in Poland, who sought to shape a positive image on Mexico in Poland, as and also in other parts of Europe. With the purpose of promoting immigration, these representatives strived to neutralize the stereotypical image Polish people had about Mexicans as a result of biased media articles and Hollywood movies. Shifting to another period, Fatalski’s essay talks about Poland’s foreign policy towards Mexico during the Cold War. Although this European country’s sovereignty was curtailed by the Soviet Union, its foreign policy managed to have its own initiatives as well, with Mexico having had a central role in Poland’s Latin American strategy. Mexico, in turn, had an independent foreign policy and laid special emphasis on Eastern Europe. From a comparative perspective, however, until 1990, other countries of the region were more successful than Poland in the creation of closer contacts with the Mexican government. The present and the future of these relations are the central topics of the section’s two final essays, one written by Justina Łapaj-Kucharska and entitled “Selected Aspects of Polish-American Relations on the Political, Economic and Cultural-Scientific Level in the 21st Century” and the other by Joanna Gocłowska-Bolek, “Strengthening Polish-Mexican Academic Cooperation: Present and Future Perspectives.” In the 21st century, both political and economic collaborations have been intensified with the United States of America and with Mexico as well, having been completed with various ways of cooperation and official agreements especially in higher education and concerning joint research projects with universities having a major role in these developments. In order to boost the cooperating nations’ economic competitiveness and increase their opportunities to face the challenges of the 21st century, both authors suggest that these cooperations should be further improved and diversified in the academic field and extended to other areas, as well; Gocłowska-Bolek also identifies the main constraints of these practices, its dynamisms and possible weaknesses of these present and future tasks.

The second part of the volume focuses on North American Studies. Łukasz Barciński’s article, “Orders Behind the Visible – Puritan Elements in the Polish Translation of Gravity’s Rainbow by Thomas Pynchon,” examines the Puritan religious elements of the novel and analyzes their preservation in Robert Sudół’s Polish translation by laying emphasis on the dangers, gains and losses that may emerge during the translation process. The author uses excerpts from the target text to determine the shifts of meaning that appear in the Polish translation, arguing that Sudół sometimes choses to stray away from the Puritan intertextuality as he overlooks some religious connotations. Further on in the volume, in “American Slavery Through the Eyes of British Women Travelers in the First Half of the 19th Century,” Justyna Fruzińska examines how differences can be detected in the travel writings of male and female authors. It is interesting that some of the women travelers she talks about tried to conceal or at least diminish the importance of their gender in their accounts, because their main audience simply preferred male writers. However, in some female travelers’ writings their gender comes into the foreground as they discuss – especially in relation to slavery – questions of inferiority and superiority, the oppressed and their oppressors, identifying themselves with often subjugated groups. The female aspect is also the central topic of Jolanta Szymkowska-Bartyzel’s “Successful Against All Odds? – Margaret Fuller: The Self-Made Woman in the Nineteenth Century.” One of the first gender theorists, the philosopher, writer and journalist, the Margaret Fuller was able to break down gender boundaries in the 19th century and serve as a pioneer in several fields, for instance, she became the first female foreign correspondent, an issue that is central to this essay.

Apart from gender issues, Kryštof Kozák’s writing on “Conflicted Cultural Memory and U.S. Foreign Policy: The ‘Lost Ca(u)se’ of the U.S. Radar Base in the Czech Republic,” combines historical facts with questions raised by historical memory. Placing the U.S. radar base in the center of his study, Kozák engages in examining the transformation of the relations between the United States of America and the Czech Republic. The end of the Cold War and the collapse of the communist power set up a new international coordinate system with the Czech Republic entering NATO, but their rapprochement was shaded by the U.S. plan for constructing an important radar base on Czech soil. The article – backed by an extensive bibliography – clarifies the concerns and details behind the negotiations, and the consequences of these that the author considers part of the participants’ cultural memory. Magdalena Trzcionka also made use of a substantial bibliography while elaborating her essay on a more contemporary topic of “The Bitcoin – Democratic Money in a Neoliberal Economy.” The widely known, although contradictory cryptocurrency has the potential to restructure and revolutionize the world economy through the block chain technology and in this context, the author explains all original assumptions of the bitcoin system pointing out the reactions and possible outcomes of this emerging cryptocurrency, which, according to its supporters, may lead the world’s societies towards a sui generis, direct democracy.

The Cracow-based Ad Americam. Journal of American Studies has focused since the publication of its first volume in 2000 on all disciplines associated with a more general approach to American studies. This perspective has been subject to further enhancement, as with the Volume nr. 17 published in 2016, the focus pointed entirely towards Latin America. The present volume, published in 2018, proves also that Inter-American studies have a well-received direction popular among Polish researchers and more general readers alike. The first section of this recent volume, primarily aimed at the 20th century relations between Poland and Mexico, delivers essays that may inspire new investigations on the field, while the second part offers wider topics with intriguing articles that add new information to the existing research projects regarding the United States of America.