Iren Annus is Associate Professor of American Studies at the University of Szeged, Hungary. Her research focuses on Identity Studies: she has engaged in research on the cultural and social construction of gender, race, and religion (Mormonism, in particular) in the United States and Hungary. Email: 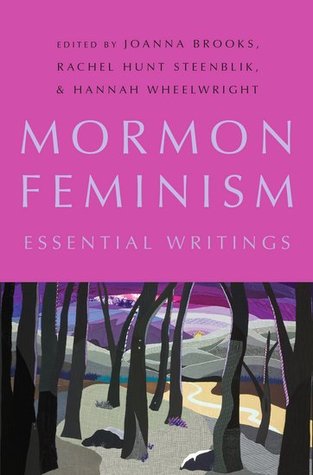 The volume opens with a brief text entitled “A Note on the Cover” (p. xi), explaining the background of the image that appears on the front. It is a color picture of a landscape: grey, bare trees dominate the foreground, with scenes of gently sloping mountains opening up in the distance. It is a photo of a quilt made by Latter-day Saint feminist blogger Nikki Hunter. In crafting this piece, she used patches from pairs of pants donated by numerous Mormon women who, inspired by a call in 2012, had decided to wear those pants to local church services to raise awareness of feminist issues within the Mormon Church. The call also asked Saints to express their sympathy with the cause by wearing purple; these items of clothing provided the elements for a composition of the faraway vistas and the skyline with the sun rising in the middle. The quilt has thus become both a physical and symbolic commemorative work of art that celebrates this unique event. As Hunter has stitched the different items of clothing together to create an exceptional representation of the dawn, the beginning of a new day, so too have the editors of the volume compiled various writings to form a collection that is likely to mark the beginning of a new era.

This volume is indeed a landmark in the history of Mormon Studies as well as Gender Studies, and a major contribution to other disciplines, such as American religious and social history – which we begin to grasp fully as we read the Introduction to the book. Written by Joanna Brooks, one of the editors, it is much more than an introduction: it is a study that outlines the complex history of Mormon women and their intellectual and spiritual efforts to gain recognition and achieve gender equality within the Latter-day Church since it was established in 1830. Brooks brings insight and sensitivity to her discussion of Mormon feminism in particular – a seemingly enigmatic concept, a point on which she also elaborates. In this process, page after page, the author also explores the diversity of the movement since its emergence in the late 1960s and early 1970s as well as the plurality of experiences and positions occupied by Mormon women involved in the struggle. The introductory study is followed by a timeline of “the pre-history and history of the Mormon feminist movement” (p. 25) from 1940 to the present, in which the authors have made sure to include all formative events, seminal debates, decisive speeches, and ground-breaking publications along the way.

The writings in the volume – the number of which exceeds sixty – are presented in four chapters, each involving texts published in different decades from the 1970s to the early 2010s. The authors included in the book represent a wide cross-section of the American Mormon female population, which illustrates convincingly how feminism has grown and expanded throughout these pivotal decades. Among the authors, one may find: highly acclaimed academics, such as Claudia Lauper Bushman, Laurel Thatcher Ulrich, and Joanna Brooks; independent scholars, including Lynn Matthews Anderson and Elizabeth Hammond; activists and authors, for example, Sonia Johnson and Carol Lynn Wright Pearson; and representatives of civil projects and initiatives, such as Neylan McBaine and Lavina Fielding Anderson – to mention only a few areas and illustrative names.

Accordingly, the topics addressed throughout the book cover: history, from the earliest debates on womanhood within Mormonism all the way to the present (such as Carol Cornwall Madsen’s “Mormon Women and the Struggle for Definition: The Nineteenth-Century Church”); and theological concerns, particularly through the regularly surfacing tropes of the Heavenly Mother and priesthood, including the powers with which the latter is endowed (among them Janice Merrill Allred’s Excerpts from “Toward a Mormon Theology of God as the Mother” and Elizabeth Hammond’s “The Mormon priestess”). Some pieces express the female longing for a spiritual mother through poetry (such as “Motherless House” by Carol Lynn Wright Pearson), while others capture the passionate activism in which some of the authors have been engaged. Perhaps the most well-known group of activists is the group of Mormon intellectuals called the “September Six,” who were excommunicated in September 1993 for having voiced their views to the Church leadership on various issues and calling for the realization of “the feminist potential of Mormon theology” (p. 181), among other things (see Lavina Fielding Anderson’s “The LDS Intellectual Community and Church Leadership” and Margaret Merrill Toscano’s “Put on Your Strength, O Daughters of Zion”).

The structure of the book facilitates a range of uses: the writings are arranged in time sequence, each contextualized in an introduction, through which a detailed pattern of Mormon historiography emerges, offering insights into formative moments in the past of women claiming a voice and recognition within the Church. Each introduction is followed by a list of references and a selection of suggested readings on the particular event or context tied to the piece to come. Afterwards, the actual primary texts can be found. These writings not only strikingly illustrate the history of the LDS women’s movement for gender equality, but also faithfully represent the multi-dimensional presence of the movement: the volume includes a wide variety of writings, from poetry through historical studies, theological analyses, autobiographical writings, and political pieces to blog entries, while it also captures the complex broader social reality within which these efforts were shaped.

This collection finally gives voice to decades of concentrated efforts to write women who represent dissenting voices into the narrative of the Church and of American society. The editors perform an admirable task not only in relating the texts and their feminism to the Mormon faith and society – generally considered to be highly patriarchal and traditional, particularly when it comes to gender roles and sexuality – but also in demonstrating the way they were seen as representative of mainstream American feminism, reflective of their concerns throughout the years, and ultimately embracing the intersectionalism that acknowledges the plurality of female experiences in terms of gender and race, class, etc., within the same religious community. Remarkably, the book manages to create a unified expression of feminist sisterhood from a multiplicity of voices, while at the same time also revealing elements of the internal logic of patriarchy that has characterized the Church and its leadership.

This important collection offers both a retrospective elaboration on the past and a firm foundation – and no little ammunition – for ongoing struggles in the future through debate and activism. Published by Oxford University Press, the volume also helps to locate Mormon feminism within (the) American women’s movement(s) and feminism(s) as well as in related academic discourses. Coincidentally, perhaps it also lays the groundwork for a canonization of these pieces, hopefully advancing the causes the authors so passionately support in every possible way. Until then, however, it remains a powerful intellectual and spiritual guide to embrace and ponder.