"The adventures of the Hungarian Holy Crown" review by Zoltán Peterecz

Zoltán Peterecz, PhD, is associate professor at the Institute of English and American Studies at Eszterházy Károly University, Eger, Hungary. He teaches American history and American culture; his main area of research is American history, American foreign policy, and American-Hungarian relations in the first half of the twentieth century. His first book investigated the Hungarian financial reconstruction under the aegis of the League of Nations and its American financial controller (Jeremiah Smith, Jr. and Hungary, 1924–1926: the United States, the League of Nations, and the Financial Reconstruction of Hungary, Versita, 2013). The book’s Hungarian version was published in 2018 by Debrecen University Press. Dr. Peterecz published various articles; his latest book focused on the historical evolution of American exceptionalism (A kivételes Amerika, 2018). 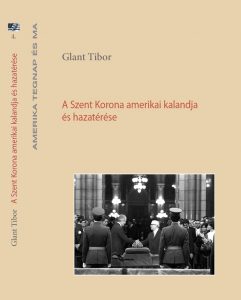 The latest volume of Debrecen University Press in its series dealing with American-Hungarian relations brings to light the 33-year-old adventure and captivity of the Holy Crown of Hungary in the United States. The Holy Crown of Hungary is without a doubt one of the most powerful symbols of old and present Hungarian history. Although almost certainly it is not the same crown that Hungary’s first king, St. Stephen was crowned with, for many people even today―with its accompanying regalia―the Holy Crown is of enormous importance. The crown’s return to Hungary was one of the outstanding moments during the socialist regime—a moment surrounded with political debate, protests, and the questions of political legitimacy. Tibor Glant of Debrecen University, who has devoted his professional career to researching and writing about historical relations between Hungary and the United States, has produced quite a few volumes over the years but his first monograph was about the Holy Crown (1997). Since then he has kept further researching the topic and finding new materials, making interviews, and traveling to American and Hungarian archives and libraries, researching materials unavailable at the publication date of the first volume. So, this second edition, written also in Hungarian, is a revised and enriched book with the publication date is being no accident: in 2018 it was forty years after the Holy Crown officially was given back to Hungary by the American government.

Between the fall of 1945 and the spring of 1953—when in Hungary the crown guards kept moving the relics; then the crown was taken to Germany, to be then handed over to American custody in various places to ultimately be shipped to the United States—the events are nothing short of a well-thought-out adventure story. Glant introduces, as a subtheme, the wartime American plan for salvaging many stolen fine arts pieces and monuments. This, for a long time, was not a hot topic among historians, but recently got more and more into the limelight. The American plan was responsible for preserving much of the cultural heritage of Europe and making sure that most of these items were returned to their original places. The Americans handled the Hungarian relics with due professionalism and, according to Glant, they were in better hands than they would have been in Hungary―at that time. The eight years of the Holy Crown’s stay in Germany can be seen as the first phase of its adventures. The author examines the question as to why the United States did not return the treasure to Hungary, especially in light of the fact that both gold and silver reserves and the treasures of the Museum of the Fine Arts of Budapest were handed back. The most important reason is to be found in politics and diplomacy. The Hungarian-American relations grew more and more antagonistic, and after the communist takeover in 1948, they became quasi-belligerent, echoing the context of the Cold War logic. Besides, Americans received the Holy Crown from the crown guards themselves―therefore it did not constitute stolen material. By the early 1950s, thanks to the almost nonexistent diplomatic relations, there could be no question of the Holy Crown’s return to Hungary. The next period is between 1953 and 1970. The Holy Crown was taken to Fort Knoxville, the famous place of the American gold reserve, but neither the Hungarian government nor the Hungarian émigré community knew anything of this and wild guessing was the norm as to the Crown’s whereabouts.

The lacunar relationship between the two countries during the early 1950s changed very slowly over the next fifteen years, and only with the nomination of ambassadors for the first time in 1966 did the ties start to normalize between Washington and Budapest in the setting of the Cold War. The decade following the turbulent year of 1968 proved rather positive especially compared with earlier decades, although one cannot speak of a conflict-free period at all. Still, the relationship between the two countries improved overall, with the help of the four-year tenure of American ambassador Alfred Puhan, who played a significant role in the diplomacy of the two countries starting from the fall of 1969. This was naturally not a partisan initiative of a lone diplomat but the manifestation of the more general American foreign policy during the Nixon years, when the United States sought the improvement of bilateral relations with the Soviet-dominated Eastern European countries. Despite smaller setbacks, both in the diplomatic and financial fields, serious steps were taken toward a friendlier atmosphere, which, among many other things, paved the way for the return of the Holy Crown to Hungary. However, the regalia’s faith was defined in the strange setup of the Hungarian and American governments, the American press, and the American Hungarian community. While the Kádár regime in Hungary naturally wanted to get the Holy Crown back with certain players of the American foreign policy establishment open to this thanks to the normalization of the relationship between the two countries, every leak that appeared in newspapers created a backlash on the part of the Hungarian Americans, backed by the Congress and the national security establishment, in the wake of which the White House usually tried to wash its hands off the matter.

In the end, with the election of Jimmy Carter, the situation matured. The Hungarian government, in sharp contrast with its earlier strategy, undersigned the agreement on technical, scientific, educational and cultural exchange, an issue that had been dragging on for twenty years, and this was the undeclared antecedent for the Holy Crown’s return to Hungary. Moreover, Carter saw the handing back of the regalia as a moral obligation. Since the State Department and the national security establishment were each other’s rivals, there was plenty of inner tension, and, as Glant concludes, “without definite presidential will the regalia would not have been returned” (174, translation mine). The picture was further complicated with protests and demonstrations, involving the Congress’s role and even juridical procedures, but in the end Carter’s resolve prevailed.

Glant in his updated book also shows how after 1973 a henceforth ignored Hungary had been presented as an acceptable communist country to the larger American audience by the government circles. This was mainly promoted by the relative freedom of religion in Hungary, a high point of which was Billy Graham’s quite popular visit in the summer of 1977. Also, after more than a year’s absence, Washington named a new ambassador, Philip M. Kaiser, whose job was to conduct the preliminary negotiations for the return of the Crown, which he successfully carried out. The triumph was almost given since, as the historian writes, “both parties sought consensus” (212). After two Hungarian art historians examined the regalia at Fort Knox, only the composition of delegations, the coordination of the prepared speeches, and the exact date of the return were left. This last one was established as January 6, 1978. The Americans made it clear that János Kádár should not be present at the ceremony and the United States would be represented only by Secretary of State Cyrus Vance—President Carter was not willing to visit Hungary, although he was visiting Poland. This was a clear sign that the Americans dictated the conditions of the Crown’s return; this was an important step in the normalization process of the bilateral relations but was not meant to be seen as closer friendship between the two governments. The ceremony itself produced no hiccups and had a friendly atmosphere. The collection of several people’s description present at the ceremony is one of the most interesting parts of the volume. In Glant’s conclusion, “getting back the Holy Crown, together with the soon-signed trade agreement, was socialist Hungary’s biggest diplomatic success throughout the Cold War” (255). But the homecoming of the regalia had a significant yield in another dimension as well; as Glant notes, the “Holy Crown’s return stirred things up and ushered in a historical discourse that was not compatible with the socialist state’s narrative” (253).

The book is a welcome read for all those who are interested in the most recognizable historical object of Hungarian history but also for those with focus on American-Hungarian relations. However, some former knowledge will be required at places regarding American history and political institutions. At certain points in the text, superficial understanding of American culture, politics, and history will leave the average reader confused. For instance, a Hungarian reader will not necessarily comprehend what it means when Richard Nixon won the 1968 presidential elections with 301 electoral votes, or Ronald Reagan twelve years later with 489 such votes, or what was the significance of the Port Huron Statement in 1962 (103, 108, 105). In these cases a footnote with some short introduction may have proved useful. These examples are interesting because in other places Glant provides explanation for similar data. Aside from this, the language of the book and the book in its totality, is interesting and engaging, which makes it a good read for Hungarian readers. The book’s special strength is its rich collection of pictures and the helpful map depicting the adventurous journey of the Crown from Hungary to Fort Knox and back.