"Review of From Dog Bridegroom to Wolf Girl: Contemporary Japanese Fairy-Tale Adaptations in Conversation with the West" by Edit Szűcs

Edit Szűcs is enrolled in the Gender Studies MA program of the Institute of English and American Studies at the University of Szeged, Hungary. Her forthcoming thesis focuses on LGBTQ+ representation in children’s media. Email: 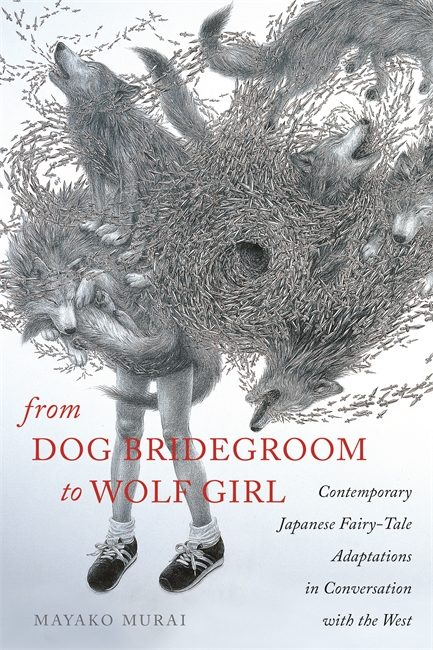 In the midst of the postmillennial fairy-tale renaissance, when fantastic imagery has permeated a plethora of popular representations commercializing the topos of “happily ever after”, scholarly research in fairy-tale studies has been enriched by an impressive variety of interdisciplinary enterprises which scrutinize fairy tales in their relation with global political changes (Bradford et al 2008), disability studies (Yenika Agbaw 2011), or queer theory (Greenhill and Turner 2012), among others. Mayako Murai’s book From Dog Bridegroom to Wolf Girl is yet another addition to this exciting range: her analyses inoculate fairy tale studies with a cross-cultural feminist literary/cultural critical perspective, and as the title suggests also offer an excellent read for anyone interested in animal studies and willing to expand their knowledge of Japanese fairy-tales and their contemporary adaptations and reworkings. Through a transnational, cross-cultural, intermedial approach, Murai investigates how Japanese and “Western” texts mutually inspire and inform one another across a variety of media, in verbal and visual art alike. One of Murai’s major feats is combatting the hegemonic ideological practice of marginalization by proposing a more egalitarian view of Eastern and Western artistic practices, as well as of relations between human and animal, image and text, old age and youth/novelty. This book will be an important addition for anyone engaged in fairy-tale studies and gender studies who would like to move beyond the Euro-American centered perspective still prevalent in many fields of academic study.

Murai focuses on literature and visual arts created by Japanese women authors and artists to see how their works can be put into conversation with Western fairy-tales and adaptations. Her criticism is informed by Western feminism, following women writers who created their own fairy-tale retellings, such as Angela Carter and her famous collection of short stories titled The Bloody Chamber, which Murai uses to foreground issues of gender within Japanese culture and within the stories. However, it is important to note that the authors and artists in question are not necessarily feminists themselves, and whether their work is understood to be feminist or non-feminist is a matter of the interpretive stance taken. Another key issue Murai focuses on is the unpopularity of feminism and general lack of feminist criticism in Japan. Therefore, the other aim of her book is to incorporate feminist insight into the ‘glocal’ study of Japanese fairy-tales, even though she notes the limitations of such an endeavor.

The book consists of five chapters. The first one gives a brief but insightful historical overview of the spread of Japanese and later Western fairy-tales in Japan. The other four chapters each focus on one Japanese woman artist whose work of fairy-tale adaptations has proved to be influential in both the Japanese and the global context. The works of these women are resistant to many fairy-tale traditions and often have feminist aims. It is worth mentioning that while in the second and third chapters Murai does give a summary of the main stories discussed, nevertheless, those unfamiliar with the tales might want to read the texts referred to – including “The Bridegroom Was a Dog”, “The Crane Wife”, “Bluebeard”, “Dormitory”, “Specimen of the Ring Finger”, and Hotel Iris — for full understanding and immersion. The fourth and fifth chapters, which discuss visual artworks, have plenty of images to make the reading more enjoyable and facilitate understanding.

In Chapter 1, the readers can learn about the history of the fairy-tale in the Japanese context, from the first tales originating there to the import of Western fables that were exoticized and domesticated at the same time for Japanese readers. The most important tendencies in the development of fairy-tales have been the change of attitude, around the 1980s, whereby fairy-tales were no longer considered to be designed for a target audience composed only of children, and secondly, more freedom was given to women both as creators and as characters in the stories. Murai explains that she purposefully chose women artists who create violent and sexual content for adults in order to subvert the conjoint infantilization-feminization of Japanese culture, too often associated with childishness and naïve innocence along the lines of the globally popular guro-kawaii trend Murai has analyzed elsewhere (see Murai in Kérchy 2011).

Chapter 2 focuses on the work of Tawada Yōko and her rewriting of the traditional animal bridegroom tale. Murai explains the difference between Western and Eastern stories involving animal bridegrooms. While both will inevitably work to reestablish clear lines between nature and culture, Western stories aim at the “dissolution of difference”, meaning that by the end of the story the animal will most likely turn into a human, like in Beauty and the Beast. In Eastern tales, however, the animal partner will remain an animal but will return to nature or be killed, like in “The Crane Wife”. Tawada’s novella “The Bridegroom Was a Dog” breaks this tradition. Being both Japanese and German and working in both languages, Tawada expresses no desire to erase difference in her adaptation; instead, she leaves the ending ambiguous, blurring the line between humans and animals, what is real and what is fictional.

In Chapter 3, Murai analyzes the motif of “the bloody chamber”, best represented in the West by the story of Bluebeard. Murai interprets some of Ogawa Yōko’s works as adaptations or “recastings” of Bluebeard’s story, namely her short stories “Dormitory”, “Specimen of the Ring Finger”, and most importantly her novel Hotel Iris. She notes that Japanese critics almost never make the connection between Ogawa’s stories and “Bluebeard”, most likely because the French folktale is relatively unknown in Japan. Hotel Iris became much more successful in the West and especially France because it resonated with that context better than with Japanese audiences, due to the “cross-fertilization” of cultures and because the text could be included in the discourse of feminist fairy-tale criticism. Other than highlighting the differences of reception, Murai also focuses on how Ogawa’s works subvert the trope of the bloody chamber. What awaits the heroine upon entering the forbidden room in these stories is not death but new possibilities and a sense of liberty.

Moving over to the visual arts, Chapter 4 focuses on the photographic works and visual installations of Yanagi Miwa, who disrupts the stereotypical and antagonistic old-young woman relations common to fairy-tales. In her series Fairy Tale: Strange Stories of Women Young and Old, Yanagi creates dissonance by blurring the lines between child and old woman, princess and witch. In her works she focuses on the antagonistic yet intimate relationship between these characters and emphasizes bonding and a sense of shared destiny instead of competition. Through destabilizing these figures by making their age and relationship ambiguous, Yanagi makes her audience reflect on the constructed nature of the roles women are forced into in traditional fairy-tales.

The last chapter examines the use of the wolf-girl motif in the art of Kōnoike Tomoko. While her works cannot be said to be an adaptation of any specific fairy-tale, connections can easily be drawn between her works and the story of Little Red Riding Hood, since her selected works center on the figure of a girl merged with wolves. Kōnoike creates her works in many different media: her drawings, the creative process of which she compares to stitching, serve to bring back into focus the handicrafts of women, which have been traditionally marginalized in art. Her public art projects bring communities together and, through making them climb a mountain in order to get to the exhibition, even involves her audience in experiencing the “story” and becoming Little Red Riding Hood themselves, proving that fairy-tales do not necessarily have to be book-centered.

The insight into Japanese culture offered by Murai’s book provides a solid starting ground for further fairy-tale research. It functions as a nice addition to studies, such as Paul Well’s The Animated Bestiary: Animals, Cartoon, and Culture, which explore the symbolic meaning of animals in Western animations, only mentioning the works of Miyazaki and Jungle Emperor Leo in passing, while scrutinizing the ways how anthropomorphized animals help discuss taboo topics which would be too difficult to handle through stories with human characters.

Overall, Murai’s book clearly shows the advantages of a multicultural perspective, proving that different cultural contexts can give mutual insights into one another’s artistic creations. In a field as marginalized as the comparative intercultural study of women’s art, her monograph is a valuable addition to fairy-tale research that encourages further systematic study. The book has received a review from the Times Literary Supplement, demonstrating that Western audiences have an interest in these never-before-heard stories. Murai borrows Cristina Bacchilega’s expression of the “fairy-tale web” – which she explored in her seminal book on the politics of wonder in postmillennial fairy-tale adaptations – to describe the major aim of From Dog Bridegroom to Wolf Girl, which is to “[…] weave another pattern into the fairy-tale web, making its design even more intriguing.” (Murai 144). In that she certainly succeeded.