Tamara Muhel is enrolled in the Gender Studies MA program of the Institute of English and American Studies at the University of Szeged, Hungary. Her forthcoming thesis explores how the ‘degendered’ unreliable narrator of Edgar Allan Poe’s short stories challenges readerly expectations. Email: 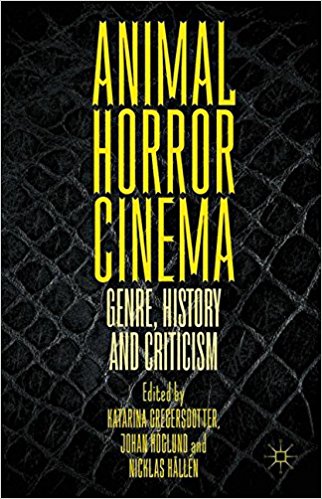 Donna Haraway’s revelatory book When Species Meet celebrated the relationship between humans and animals based on mutual agreement and shared work in service of a common good seeked by “companion species.” But what happens when the idealized symbiosis envisaged by Haraway does not take place and the harmonious equilibrium suffers a rupture from either side?

Animal Horror Cinema sheds light on the importance of understanding the endangered positions and phobic fantasies involved in the interconnectedness of human and non-human agents in the ecosystem. As a meticulous, historically informed cultural critical overview of animal horror cinema, Katarina Gregersdotter, Johan Höglund and Nicklas Hållén’s anthology will arouse the interest of scholars specialized in human-animal studies and/or film studies, but can also easily grab the attention of lay readers willing to learn more about the interrelations between animal cinema, social politics, economic crisis, and the anthropomorphizing agenda permeating Western and non-Western artistic representations.

My initial assumption was that a book scrutinizing the intricate connections between cinema, horror, and animals will necessarily venture on a re-reading of Jaws, Godzilla, Alien and other well-known, generally low-budget horror films with monsters. I was wrong and realized that the greatest achievement of the authors was precisely this challenging of the general misconceptions regarding the animal horror genre.

The essays of the collection illustrate how animals have been inevitable for humans’s self-definition, as the category “human” gains meaning only in relation with the category of “non-human”: humans gain self-consciousness solely by defining themselves in their contrast or contact with animals. The book challenges the necessity of this dichotomy and argues for an interspecies interconnectedness. It explores how, on the one hand, cinematography’s anthropomorphization of animals projects human emotions on beasts which closely resemble existing animal species, and on the other hand, how humans in the ‘anthropocene’ have come to act like instinct-driven beasts aggressively striving for increasing territory and power.

In the introduction the reader learns about a Victorian celebrity Topsy, the elephant and his infamous public execution that both chilled and entertained nineteenth century audiences who were just as much surprised by the exotic beast as the cutting-edge technological invention of electricity. Topsy’s electrocution was a result of three people’s death caused earlier by the enormous animal: contemporary audiences assumed that Topsy turned intentionally against humans, and were so frightened by the idea of an intelligent non-human monster that they decided to kill this major sensation. Topsy’s case is unique in so far as it was video recorded; so it was the first instance that cinematography, technology, and human representation of animals became intertwined. Albeit the recording picture technology functioned as an instrument of human cruelty, the anthropomorphization that was the reason for the animal’s punishment have permeated popular cultural visualizations of animals.

The fictional topos of an animal consciously transgressing the man-made moral boundaries between right and wrong with the intent to annihilate a human being has been revisited over and over again by fantastic arts, and especially the most spectacular of them all, cinematography. Animal-horror cinema is a popular filmic genre in which animals commit violent deeds against humanity, and, regardless of which species is to blame, the punishment is always suffered by non-humans. The sub-genre of the so-called “eco-horror” deals with the possible disastrous ecological consequences of hazardous and polluting human preoccupations: it summons a nightmarish vision of a self-deconstructing ecosystem that may turn against the fauna and flora of the planet, and most often features mutant creatures who teach humanity a lesson about tempering with nature.

However, the authors of the volume suggest to replace the concept of “animal horror” by that of “animal cinema”, arguing that the aim of their specific kind of methodological take on animal cinematography is to give a revelatory explanation on the ways animals commit transgressive acts against humans, to defamiliarize their alleged cruelty and focus on how they must suffer the succeeding punishment even if ever so often humans are to blame for the interspecies conflict. Although animal horror features fictional monsters the stories it tells can easily remind of real-life cases of animal abuse. The articles’s theoretical take is invested with an ethical potential as the horrors associated with animals (as perpetrators and victims of violence) warns us how often cinema has exploited animals for commercial, entertainment, and (pseudo)scientific purposes. The goal of the anthology is to reveal the political potential of low-budget scary movies by exploring “the mechanisms and ideologies of horror in the relation between human and non-human animals on film” (5).

Another seminal issue relates to the ethical treatment of animals in cinematography and the responsibility of filmmakers in shaping collective imagination: Jaws’ evil white sharks, for example, spread false and terrifying thoughts about this species and caused a widespread hysteria amongst coastal residents in the United States. In connection with the collective trauma of imminent ecological catastrophe, ethically-invested topics range from the debates about global warming and ozone depletion to other forms of environmental degradation (such as over-industrialization, desertification and deforestation) characteristic of the anthropocene, “a new geological era in which human beings act as a force determining the climate of the entire planet all at once” (9). The challenging of speciesism has exciting connections with the critique of other form of political oppression, such as post-colonial studies’s challenging of ethnocentrism.

After the editors’s thorough introductory overview of the historical of animal horror cinema and the interconnectedness of critical human-animal studies and cinematography/ film studies, some chapters tackle human-animal relationships and their representations in filmic narratives while focusing on how the ecosystem becomes victimized by human violence and eventually, in return, takes an equally violent revenge on humans. Case studies range from Aussie crocodile movies (such as Rogue, Black Water, and The Reef), shark horror films (from legendary Jaws to the more recent Open Water), big bug flics (Them!), and amphibian dread (Frogs), to tourists’ consumption of indigeneous wildlife, and the introduction of cutting-edge new concepts as eco-gothic or posthumanist horror. Further chapters discuss the cinematic theme of animal invasions on human territories in non-Western cinema: the analysis of deconstruction and consumption in Chinese animal horror film is particularly refreshing, so is the study of filmic fantasies about the connections between humans and wolves, including shape shifters, such as the wolf-man. The simian horror expanded in the Planet of the Apes series explores the relationship between humans and animals by playing with the idea of inverting their hierarchical positionalities.

The book studies animal horror cinema by conjoining the agendas of film studies and animal studies in innovative ways. Although the thirteen chapters discuss the topic from different perspectives, and hence make perfect sense on their own, it is worth investigating the possible connections between the contributions, and explore how they trace a scary and splendid panorama of life on Earth and human fantasies thereof.