Zsanett Varga is MA student at the Department of American Studies, Institute of English and American Studies, University of Szeged. Her research interests include gender and film studies with a special focus on experimental and independent American cinema. Email: 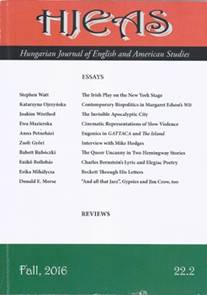 The Fall 2016 issue of the Hungarian Journal of English and American Studies (HJEAS) includes a wide variety of essays that cover issues related to literature, theater, and cinema. Articles discussing topics on literature investigate the dimensions of apocalyptic destruction in selected poetry, introduce the winner of last year’s international Janus Pannonius Grand Prize for Poetry, and offer a refreshing take on Hemingway’s selected works. One of the two essays on drama included in the issue focuses on the representation of Irish-American national identity, while the other deals with doctor-patient dialogues in contemporary healthcare institutions on the stage. Essays discussing cinematic representations focus on the aspect of violence and its narrative, structural, and spatial appearance on screen. The review essays and several brief reviews in the volume provide an adequate conclusion to its aim, which is to keep the readers of HJEAS informed about the topics the field of English and American Studies covers.

The first two essays of the issue focus on theatrical dramas and the way they can help audiences make sense of the world around them. The issue’s opening essay, Stephen Watt’s “Outside Mullingar, A Moon for the Misbegotten, and The Night Alive: The Irish Play on the New York Stage,” discusses what Irish identity means and how it is constructed within the context of Irish-American theater. Watt’s discussion touches upon a variety of aspects, such as gender complexity and 19th century Irish rural environments, primarily in Irish plays on the New York stage. Watt’s discussion focuses on how American audiences receive, interpret, and what it is that they take away from plays by Eugene O’Neill, John Patrick Shanley, and Conor McPherson. In “Doctor-Patient Communication and the Contemporary Biopolitics of Disposability in Margaret Edson’s Wit,” Katarzyna Ojrzyńska examines contemporary doctor-patient communication within the confines of the American institutionalized health care system. This is done through the analysis of Margaret Edson’s Pulitzer Prize-winning drama Wit (1999). Ojrzyńska argues for the play being a “play about language and power,” while simultaneously representing “modern attitudes toward morality” as well (301).

Joakim Wrethed’s article in comparative literature, “The Invisible Apocalyptic City: The Affectivity of Urbanity, Movement, and Desire in William Blake’s ‘London,’ Don DeLillo’s Cosmopolis, and Ivan Vladislavić’s The Exploded View” examines urbanity while focusing on the individual’s experience in an apocalyptic environment in Blake’s poem and in DeLillo’s (2003) and Vlasislavić’s (2004) novels. Wrethed argues that these selected works all portray urbanity “and/or capitalist theology as a catalyst for the apocalyptic theme” (323) and investigates the possibilities that metropolitan spaces are ideal for manifesting these ideas.

The next three essays discuss films, filmmakers, and the logic of films. Ewa Mazierska’s “Representation of Slow Violence in the Films about Collapsed East European State Farms” discusses how films represent the period of the last stage of socialism in Eastern Europe through the analysis of three Polish documentaries—Mgła (Fog, dir. Irena Kamieńska, 1993), Arizona (dir. Ewa Borzęcka 1997), U nas w Pietraszach (At Home in Pietrasze, dir. Lidia Duda, 2002)—, and one Hungarian film—Sátántangó (Satantango, dir. Béla Tarr, 1994). The common theme these works explore is violence, and Mazierska looks at it as a way of representation that is aimed at providing an opportunity to start conversations. The analysis is done not in regards to the films’ “political effectiveness” but in a way as to show how different approaches are employed to depict the “slow violence” of the era, the way it “slowly catches up with everybody” (347). The following essay by Anna Petneházi, titled “’Who Can Straighten What He Hath Made Crooked?’: Eugenics and the Camp in GATTACA and The Island,” discusses bioethics through cinematic representation in GATTACA (1997) and The Island (2005). With an interesting discussion on “biopolitical spaces and mass production” (353), Petneházi points to immunitary logic being the guiding force not only behind the organization of human life but also the repressing system thereof, which occurs through surveillance. Zsolt Győri’s “’No Specks of Blood Will Land on Their Clothes, or Drip into Their Buckets of Popcorn’: Interview with Mike Hodges” starts off with a quick and concise look into the English screenwriter, director, and playwright’s body of work, which is followed by an engaging and in-depth conversation about violence in film. The discussion touches upon varied issues concerning violence, such as the supposed parallel between its representation on screen and its influence on social behavior.

The essay section of the volume concludes with two essays on literature. First, Babett Rubóczki’s “Queering Perspectives of the Uncanny in Ernest Hemingway’s ‘Mr. and Mrs. Elliot’ and ‘The Sea Change’” examines gender roles and the ambiguity of sexuality in various works by Ernest Hemingway. In the analysis, the focus is placed upon the homo-heterosexual binary in the characters’ sexual identities. In an effort to analyze the experiences of queerness through the works of Hemingway, Rubóczki takes a look at “Mr. and Ms. Elliot” (1924), “The Sea Change” (1931), and The Garden of Eden (1986) and focuses her investigation on gender bending characters. Finally, in “In Borrowed Words and Through Recycled Attentions: On Charles Bernstein’s Lyric and Elegiac Poetry,” Enikő Bollobás discusses the poetry and the theme of loss and grief in the works of Charles Bernstein, winner of the 2016 Janus Pannonius Prize for Poetry. Bollobás argues that with his return to lyricism, the former language poet lets go of language and with it abandons emotions as well. The essay concludes that Bernstein’s poetry is similar to Dickensonian poetics, but with Bernstein, “darkness will never be touched by day” (413), indicating that his poetry is even more entrenched in the world of grief than that of the most important American female poet of the 19th century.

This volume contains two review essays: Erika Mihálycsa’s “Beckett Through His Letters” and Donald E. Morse’s “’And all that Jazz,’ Gypsies and Jim Crow, too.” Mihálycsa notes that the third volume of Samuel Beckett’s letters is “commenting on writing and theater” in such a way that it makes the volume “worth reading and rereading” (433). Morse’s take on the special issue of Americana on jazz shows his appreciation and admiration for the musical genre and notes the important role it played in the United States, starting with the art form being politicized by the Black Liberation Movement and ending up as a tool in cultural diplomacy.

The review section of this volume includes numerous short assessments of recent publications in various fields of English and American Studies. The list is composed of Angelika Reichmann’s review of Joseph Conrad and H. G. Wells: The Fin-de-Siècle Literary Scene by Linda Dryden (“Conrad and Wells in Close-up”); Mária Kurdi’s take on Irish Women Dramatists 1908-2001 edited by Eileen Kearney and Charlotte Headrick (“A Remarkable Variety of Plays of Their Own”); also Mária Kurdi’s review of Ireland and the Czech Lands: Contacts and Comparisons in History and Culture by Gerald Power and Ondrej Pilnÿ (“Visions and Revisions: Views on Ireland and the Czech Lands from Cross-Cultural Perspectives”); Robert C. Hamilton’s criticism of Class and the Making of American Literature: Created Equal edited by Lawson Andrew (“A Class Act”); Erzsébet Barát’s review of SlutWalk: Feminism, Activism and Media by Kaitlynn Mendes (“Rape is an Act of Power not Passion”); Éva Mathey’s review of Jeremiah Smith, Jr. and Hungary by Zoltán Peterecz (“An American in Post-World War I Hungary: Jeremiah Smith, Jr. and the Hungarian Financial Reconstruction”); Imola Bülgözdi’s review of Discworld and the Disciplines: Critical Approaches to the Terry Pratchett Works by Anne Hiebert Alton and William C. Spruiell (“Can the Discworld Be Disciplined?”); Fanni Feldmann’s criticism of New Queer Cinema: The Director’s Cut by Ruby B. Rich (“New Queer Experience”); Éva Pataki’s review of New Postcolonial British Genres: Shifting the Boundaries by Sarah Ilott (“Postcolonial British Genres and Britishness: Challenged and Redefined”); and, finally, Erika Mikó’s take on Urban Space and Late Twentieth-Century New York Literature by Catalina Neculai (“A Seminal Interdisciplinary Study on New York Literature”).

In sum, this volume of HJEAS offers an engaging selection of essays that swiftly shift from covering topics on literature to theater and to cinema. With the essays structured around these topics touching upon issues from the New York stage to Jim Crow laws, from outer and violent spaces to identity representation, this volume of the Hungarian Journal of English and American Studies, similarly to many others, presents its readers with an engaging, relevant, and up-to-date take on the field of English and American Studies.