Halyna Pavlyshyn (Rys) is a PhD student at the University of Tasmania and a creative writer with three published books. She obtained two Bachelor’s Degrees: in Book Illustration (Ukrainian Academy of Printing) and in English Philology (Poznan College of Modern Languages), as well as a Master’s Degree in Literatures in English (VU University Amsterdam). Her main areas of academic interest are literature for children and young adults, education, book illustration, social semiotics and narratology. Email: 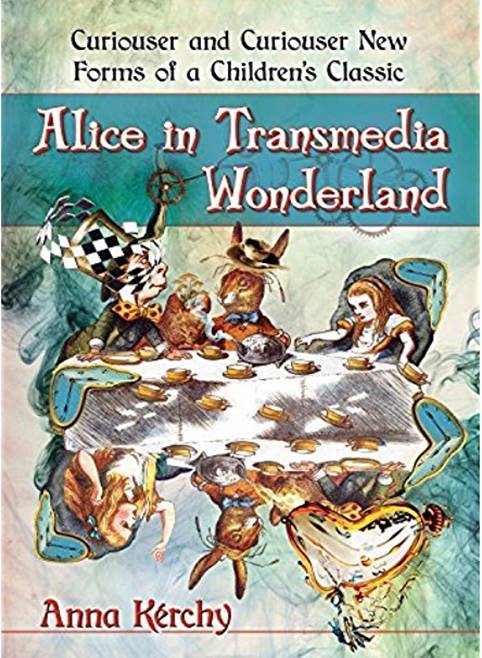 These days it would be difficult to find a person who has never heard of Alice or, at least, has not seen numerous images, books and films inspired by and with references to Alice’s Adventures in Wonderland (1865). The image of Alice has been transformed into the iconic curious girl unstoppable in her wild adventures which continue to be reinvented, reinterpreted, and recreated in all possible ways. As a result, an intense discussion has developed around the reasons and consequences of its long-lasting popularity (Sigler 1997, Brooker 2004, Leach 2009, Hollingsworth 2009). The main argument for the enduring success of Alice seems to be the author-muse relationship between Charles Dodgson (pennamed Lewis Carroll) and his child friend Alice Liddell (Leach 2000, Jaques 2010), and the succeeding mythologisation of Carroll and Alice, seen as “the two parts of a bizarre and unique symbiosis where the author and his creation have penetrated one another, merging until the boundaries of their identities are no longer clear” (Leach 2000). Further reasons include Alice’s fluid identity shifting from a heroine with no agency to a storyteller (Suchan 1978, McGillis 1983) and the captivating language games (Reichertz 1992, Turner 2010, Susina 2010) which make the book appealing to both child and adult audiences. Despite the long history of this wide range of speculations, Alice in Transmedia Wonderland: Curiouser and Curiouser New Forms of a Children’s Classic by Anna Kérchy manages to add innovative and unexpected insights to the open-ended discussion.

First of all, the “adaptogenic” features (Groensteen in Hutcheon, 1984, 15) of the Alice tales are thoroughly explored in order to gain a deeper understanding of the reasons behind the multiplicity of twentieth and twenty-first century adaptations employing various media, from iPad application to contemporary art performance. Additionally, Kérchy investigates the ways in which visual, acoustic, tactile, kinetic, and digital representations of Wonderland bring Alice to life by enabling the new meanings of the text to emerge or cause the old senses and nonsenses to disappear. This concept of multimediality is foregrounded through a detailed examination of all the nuances evoked by each medium. Finally, Alice in Transmedia Wonderland studies the fascinating transitions of the artistic emphases: from the stress on the linguistic sophistication of Carroll’s text and static visual representations in Tenniel’s illustrations to the emphasis on the erotic nature and physicality highlighted in contemporary interpretations and adaptations. Referring to the 21st-century shift in Alice’s representation characterized by erotic overtones, the study empowers uncanonized versions of the Carrollian story to enter the discourse of literary research. The sexualized reading of Alice reflects the discursive conditions of contemporary popular culture. The nonsense of Victorian fantasy survives numerous transformations and “shapeshiftings” carefully examined in this book. Consequently, even though the book focuses mostly on processes of enchantment, disenchantment, and re-enchantment in Alice, it goes beyond the discussion of Carrollian fantasy, offering readers new ways of understanding the adaptability of classical stories.

The first chapter focuses on the interplay between verbal and visual nonsense in such multimodal adaptations as pop-up books, iPad applications, and 3D CGI imagery. Among other thought-provoking and inspiring discussions about the new cultural layers evoked by moving from printed into digital media, the book explores the significations and implications of this medial transition for the reading experience. Similarly to Chatman, who once asked “What can novels do that films can’t (and vice versa)?” (1980), Kérchy is asking what iPad apps can do that books cannot. Subsequently, as though taking the analysis itself through the looking glass, the question is turned upside down and inside out, and consequently, all the features of a printed edition, which outperform its digital adaptation in certain aspects, are listed and described. Kérchy questions whether iPad adaptations of Alice actually do the classical text a favor by popularizing it or if they decrease the opportunity for new interpretations by providing readers with a limited number of options to choose from.

The exploration of imaginative nonsense takes place in the second chapter: various representations of Alice and Alice-like characters in contemporary fiction including novels (e.g. Coraline by Neil Gaiman, 2002), films (e.g. Tideland by Terry Gilliam, 2005), graphic novels (e.g. Coraline by Russell Craig, 2008), computer games (e.g. American McGee’s Alice and Alice: Madness Returns by Rogue Entertainment, 2000, 2010), and other genres and media are deconstructed. Drawing parallels between the Carrollian Alice and all the other heroines inspired by her image, Kérchy offers new insights into the studies of intertexuality and intervisuality. Analyzing poetic horrific fantasy from poststructural, psychoanalytical, narratological, and feminist perspectives, the book highlights the problematic aspects of meta-imagination and points out the fluid nature of the “childhood” idea/l protected by adults’ reluctance to free their imagination from all social restrictions.

Further analyses touch upon the idea of physicality in the perception of Alice tales. Chapter three examines the ways in which erotic nonsense emerges, whereas chapter four is concerned with embodied nonsense. In the third chapter, the myths about the controversial relationship between Charles Dodgson and Alice Liddell are discussed in detail: groundless suspicions are dismissed and novel explanations are offered. The main focus of the chapter is on the hypertextual narratives which amplify the idea of Wonderland by producing new meanings. The subjects of analysis include nude photographs created by Charles Dodgson himself, as well as biofiction exploring new perspectives of the Carroll-Alice relationship, consisting of contemporary photography, cinema and comic art. Among other texts, Kérchy introduces the reader to the art-porn graphic novel Lost Girls (2006) by Melinda Gebbie and Alan Moore in order to demonstrate how biofiction can be eroticized through the “multimedial intercourse of image and text” (Kérchy 140), by which a classical story for children can easily be transformed into playful erotic fantasy. Employing a post-Freudian post-structuralist feminist semantic approach, Kérchy’s analysis reveals how the myth of a presumably asexualized Victorian dreamchild and her humble friend with his unfulfilled and repressed desires can be transformed into a multilayered fictional piece representing trauma, pedophilia, “unwanted initiation into adulthood” (Kérchy 143), and sexual liberation into an attempt to communicate the unspeakable through eroticized imagetext.

The final chapter of the book is concerned with Alice’s embodiment in transmedia storytelling. It explores “curioser and curioser” transitions which appear when the same story wanders from prose to a cinematic form of art, and then back to verbal narratives. According to Kérchy, those metamorphoses support metafictional stories with rich sensorial experiences: verbosity is replaced by corporeality, linguistic metaphors are recycled into tactile metaphors and biofictional texts are turned into palimpsestic narratives. Starting from the end, Kérchy’s analysis searches for signification of Alice motifs in Waits and Brennan’s lyrics influenced by Rikki Ducornet’s Jade Cabinet (1994) inspired by Angela Carter’s “Alice in Prague or the Curious Room” (1990), which is dedicated to Jan Švankmajer and Eva Švankmajerova’s surrealistic film Something from Alice (1987). Thus, the transitions and transgressions of these narratives are analyzed according to semiological, feminist, and narratological points of view. Finally, Alice in Transmedia Wonderland explores the postmodern embodiment of Alice in contemporary visual art, ballet, and even in an experimental culinary art-project, all of which pay “imagetextual homages” (Kérchy 187) to Alice. At the end of the chapter, the reader may find a description of all the other significant publications and events which have been inspired by Alice and dedicated to the 150th anniversary of the first publication of Alice’s Adventures in Wonderland in 2015. Unsurprisingly, no conclusions are offered. Perhaps, it is presumed that the readers of the book are able to think critically and draw their own conclusions. This again points out the poststructural nature of the research.

Consequently, one of the main assets of Alice in Transmedia Wonderland is its ability to draw readers’ attention to the reasons why Alice succeeds in crossing the boundaries of printed media with an incredible ease and, therefore, why Alice has become an example of one of the most adaptable Victorian fantasy texts. Looking at adaptations of Alice from literal, metaphorical and historical perspectives, the book discusses novel adaptive strategies and their effects on the reader. For example, the book employs poststructuralist, narratological, and post-Marxist approaches in order to demonstrate how “a lateral coexistence of multiple versions destabilize the authority of the original and create a choir of alternative Alices" (Kérchy 15) to challenge the notion of “original” in a postmodern manner. In addition, the poststructuralist perspectives chosen to examine Alice adaptations challenge preoccupations with the purely ideological purpose of each text. For instance, building a bridge between Marxist critics who perceive Disney’s animation as an evil imposter of dominant ideology and those who enjoy the simple pleasure of escapism, the book moves the discussion a step further by offering a more complex and elaborate tackling of this question.

Finally, the study exceeds the textual borders of Alice. Using the examples of Alice adaptations, Kérchy demonstrates that re-creating the same story in new media not only can, but should provide the viewer/reader with a new plot, images, and symbols, which may represent, reinterpret, and complement the original story by producing new meanings and significations relevant to the time and culture in which the adapted text is created.

To summarize, Alice in Transmedia Wonderland presents readers with various shades of enchantment, disenchantment, and re-enchantment of Alice shaped by contemporary visual, screen, digital, and kinesthetic adaptations. Additionally, the reader is encouraged to stay actively engaged in the journey aimed at the exploration of hypertexts existing around Alice. At the same time, Kérchy’s interpretations of Alice adaptations and texts inspired by Alice even surpass the enchantment of Carrollian fantasy by considering the reasons why certain classical stories cross the temporal and spatial borders of their own time and place of creation and investigating the various possibilities and pitfalls of contemporary multimodal adaptations. Even though the book is primarily aimed at scholars interested in multimodality, semiology, and poststructural approaches in transmedial studies, it will appeal to anyone who is enchanted by Alice’s unique position as an “extra-textual cultural phenomenon” (Kérchy 10). I think it will also appeal to those engaged, critical Alice-lovers who are seeking an understanding of or even a kind of peace with contemporary multimodal interpretations and adaptations of their beloved text.