"Review of Biljana Oklopčić’s Faulkner and the Native Keystone: Reading (Beyond) the American South" by Lucas da Silva Lopes

Lucas da Silva Lopes is a graduate student at the Literary Theory Program at the Institute of Language Studies, University of Campinas (UNICAMP), Brazil. Email: 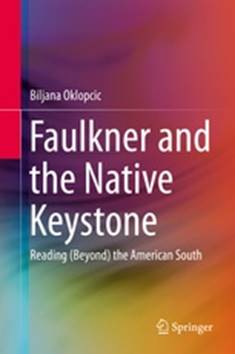 Faulkner and the Native Keystone: Reading (Beyond) the American South is the first instalment of a three-volume study on William Faulkner. As the first book of the project, it fulfills some specific intentions: it covers a wide range of questions and concerns related to Faulkner’s fiction, which will pave the way for the forthcoming volumes. Right from the title, it is possible to discern two different movements governing the book. First, “the native keystone” indicates the specific social context that motivated Faulkner’s fiction. The native background also works as a key to understand that fiction. Second, the act of “reading beyond the American South” points to the global appropriation of Faulkner, a movement that does not only contain the South but exceeds it. All the chapters are in accordance with these principles and develop them in their dynamics.

The book is divided into four chapters, a preface, and an epilogue. The first chapter discusses the roots and sources of Faulkner’s fiction. It presents the Southern society that serves as the context for Faulkner’s novels and dwells on the literary genres traditionally produced in the region, such as the Southern Gothic. Finally, it investigates the extent to which Faulkner took the notions behind those genres and reworked them in new and unexpected ways, culminating in the saga of Yoknapatawpha County. The author also uses this chapter to make some very accurate remarks regarding the key problems of Southern society.

According to Oklopčić, Faulkner’s strongest tie with the Southern literary tradition is his focus on families, which ultimately generates the range of class hierarchy within Yoknapatawpha: “the class hierarchy […] is present in its most elementary form [that is, the family] but, nevertheless, distinguishable as the planter class, the middle class, and the poor white class” (p. 8). As his fiction unfolds, those main classes tend to form several combinations, which constitute the social complexity of the Yoknapatawpha universe.

Alongside class hierarchy, racism is a prevailing force in Faulkner’s South. Oklopčić finds the paramount example in Absalom, Absalom! (1936), with the help of which she explains the specific dynamics of racism in the South. After exploring the way racism appears in the novel, and in Thomas Sutpen’s characterization in particular, she states that “racism […] appears to be a reward given to poor whites by upper classes to lessen social inequalities” (8). Framed in this way, “whiteness became a shared property of poor and rich whites; […] and generated the false sense of identification that ‘surpassed’ social and cultural differences” (8). The identification between poor and rich whites not only effaced the deep social inequality between them, but also “excluded any possibility of the identification with African Americans justifying the right on racial violence and racial intolerance as an act of both loyalty to own race and distinction from the black race” (8).

The second chapter investigates the regional issues involved in the cultural context while Faulkner was dealing with his material. It further develops the topics of race inequality and gender relations. The discussion traces these back to the institution of slavery to analyze the way the struggle to maintain a slavery-based society in the South gave rise to the formation of specific identities that change over time according to new arrangements of interracial relationships. The assumption that that relation always reinforces white superiority throughout Southern history governs Oklopčić’s argument. The same movement, with its own particular features, occurs in reference to gender relations as well: the submissive Southern woman reinforces a culture dominated by white men.

The treatment of questions related to racial and gender prejudices in Southern culture is, certainly, the most interesting topic of this study. The author creates a genealogy of racial prejudice to show how it changed over the years but was always present in the cultural practices of the region. First, Oklopčić points out that in Southern culture, the Christian notion of separation between believers and heathens turned into the most general category of the civilized and the savage. Subsequently, this criterion was replaced by one’s skin color: whites and blacks. However, due to sexual abuse of black slaves by white men, the color of the skin was not a stable way to label race. The socially accepted solution to keep the racial distinction was a consensus on blood. This new assumption rendered any social judgment much more subjective and changeable; always relying on a collective agreement, aligned to what would benefit the white community. In this way, race was linked to a moral code established and shared among whites, and valued external traits of behavior. In short: “the categories of whiteness and blackness […] were determined in terms of inner morality and exterior conduct” (17).

The conclusion is that segregation was not motivated by the concrete existence of two races but that “the South created two races and used the regional legal system to establish racial discrimination that deprived African Americans of their rights” (14). Obviously, “the abolition of slavery in the South meant neither the disappearance of racial hierarchy nor the erasure of racial privileges” (15), as racism was a kind of response full of disdain well before the end of the Civil War, or even an obstinate attempt to keep the Old South alive.

With all those questions in mind, Oklopčić proposes close readings to show how the development of racial prejudice appears in Faulkner’s fiction. The episode of the rape of Joanna Burden by Joe Christmas in Light in August (1932) is one of the most revealing examples. Oklopčić shows that instead of reinforcing the myth of the black rapist, which was used to avoid miscegenation and to distrust black men in the South during Reconstruction, Faulkner uses the episode to subvert the myth. When read in contrast with that social context of origin, the episode questions the behaviors and shows the strong charge of prejudice latent in the myth. The author also presents an interesting assertion: psychoanalytically speaking, the black rapist myth is merely the revelation of white guilt. In other terms: previously, when white men were sure of their position of power, they raped black women without any concern. Now, during Reconstruction, black men started to have the possibility to take new roles in Southern society, which raised a disturbing analogy in the white community: black men would act exactly like whites used to. So the black rapist myth is nothing more than the assumption that black men, once holding a position of power, would commit the same crimes that whites had committed in the past. Of course, this does not lead white men to recognize the crimes they perpetrated, but merely transfers their unrecognized guilt to black men.

In terms of gender relations, the author presents the Southern belle as a myth built to prevent racial miscegenation, and to impose a rigid system of gender hierarchy. The overvalued concept of the Southern belle allows white men to keep women submissive and reinforce the strong separation between blacks and whites. The cult of the belle also served as a kind of consolation prize after the defeat in the Civil War. Oklopčić draws on the example of The Snopes trilogy to elicit the way Faulkner subtly depicts the detachment of Southern womanhood from the Southern belle stereotype. Mrs. Varner, from The Hamlet (1940), “embodies the perfect product of Southern patriarchal ideology – the real ‘true woman’;” while her daughter, Eula Varner Snopes, “as a kind of the ‘new belle’, balances between accepting and subverting the idea of Southern womanhood;” and her grand-daughter, Linda Snopes Kohl, “is presented as an outsider – the anti-belle” (44). Oklopčić goes through many other examples from Faulkner’s novels, mainly Light in August and The Snopes trilogy, but also The Sound and the Fury (1929), As I Lay Dying (1930), and Absalom, Absalom! (1936).

The third chapter involves a comparative approach. With the intention to show how Faulkner’s work somehow shared a common atmosphere with other modernist writers, Oklopčić compares his novels with those of the Croatian author Miroslav Krleza. She spends many pages describing the dots that connect Faulkner’s and Krleza’s work under the domain of the genealogical novel. She describes the common themes and structures, introduces some very similar characters found in both fictions, the affinities in their plots, the focus on families and their inextricable link to place, and punctuates her analysis with close readings of their novels. Although the descriptions are very acute and the comparison of both authors is very fruitful, the approach stops there. Today, there is some doubt about the viability of comparative readings in literary studies. This is an important issue given the long debate1 regarding Comparative Literature as a nation-based paradigm that arguably would not fit the current cross-cultural or transcultural context anymore: the two poles of the debate are controversial and should be addressed in an approach of this kind. Also, the comparison is based on common content on the novels’ narrative surfaces, but it lacks the deepest and most complex angle that would make it overwhelmingly impressive: the way both authors’ works mediate social reality by turning it into aesthetic form. Perhaps the author will develop this perspective further in forthcoming publications. Anyway, it is interesting to discover a new writer whose work shares affinities with Faulkner.

In South America, it is a common practice to compare Faulkner with certain authors again and again, the most remarkable among these being Gabriel García Márquez and Mario Vargas Llosa. Specifically in Brazil, the favorite point of comparison is João Guimarães Rosa, although the Brazilian writer who was most influenced by Faulkner was Lúcio Cardoso—his Chronicle of the Murdered House (1959; an English translation was published by Open Letter in 2016) is, basically, a Faulknerian tragedy on Brazilian soil. Nevertheless, the doubt about the comparative trend lies in asking what would be more revealing, comparison with the similar or the different; and also how to sustain the comparison and draw conclusions that go beyond the mere identification of similar superficial narrative features.

The last chapter of Oklopčić’s book discusses what the author considers “universal” aspects of Faulkner’s work. That is to say, she identifies specific issues that are recurrent in the history of literature and tries to demonstrate the way they appear in Faulkner’s novels. The declared intention is to demonstrate that Faulkner’s fiction is interesting and appealing for everyone as it deals with universal issues. Finally, the book closes with an epilogue used to map the route taken from the starting point. It also points to the forthcoming studies that will follow this first book, which will focus on the Southern concept of the belle as an ideologically biased cultural assumption.

Faulkner and the Native Keystone is an important book on Faulkner studies. Written by a Croatian scholar, it proves that Faulkner’s fiction is fully available for every critic around the world, not restricted to Americans with an endogenous relation to the American South. The way its author deals with the most prominent questions related to Faulkner studies and the new questions she proposes, i.e. shifting the focus to the Southern belle and opening up new perspectives on racism, are undeniably interesting for scholars devoted to Faulkner. The post-colonialist orientation of the study is undeniable. The comparative approach she presents is interesting, although limited to demonstrating the similar narrative surface in both authors’ works. The enumeration of the supposed “universal” aspects of Faulkner’s work seems misplaced, as the post-colonialist approach dismisses a universal aspiration. Also, while there is an effort to carry out the movement announced in the title through the progress of the chapters—from specific to universal—it sounds a little bit artificial, as every chapter works as an autonomous piece, without an organic progress governing them. The book is worth reading, mainly due to the remarkable treatment of racism and gender relations on Southern culture.