"Stories Slipping Through the Cracks of Images…" by Anna Kérchy

Anna Kérchy is Associate Professor of Literature at the Institute of English and American Studies, University of Szeged, Hungary. Her research interests include gender and body studies, feminist literary theory, the post-semiotics of the embodied subject, intermedial cultural representations, interfacings of Victorian and postmodern fantastic imagination, women’s art, and children’s/YA literature. She authored two monographs, Alice in Transmedia Wonderland. Curiouser and Curiouser New Forms of a Children’s Classic (2016), and Body-Texts in the Novels of Angela Carter. Writing from a Corporeagraphic Point of View (2008), and edited collections on postmodern fairy tales (2011), the literary fantastic (2010), the iconology of dis/order (2012), Continental European freak shows (2012), and a forthcoming special issue of EJES on Feminist Interventions into Intermedial Studies. Email: 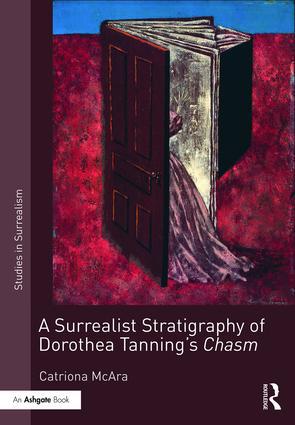 The stunningly protean, prolific artistic oeuvre of American painter, sculptor, and writer Dorothea Tanning (1910-2012) was “unfairly overshadowed”—as The New York Times’ obituary put it in 2012, when she passed away at the age of one hundred and one—by her relationship with Max Ernst. As the legend has it, the pioneering father figure of Dada and Surrealism visited the studio of Tanning, a young protégé of his art collector wife Peggy Guggenheim, for a game of chess. Ravished by a painting of hers (a topless woman in a dress sprouting roots and a winged beast crouching at her legs, eyeing the spectators as she opens a door that looks down a corridor filled with a series of identical doors), he ended up staying with her for three decades of marriage until his death. Although it was Ernst who entitled Tanning’s aforementioned surrealist self-portrait Birthday (1942) that also lent its title to her first memoir, Tanning insisted that her work remained unaffected by the influence of her famous husband, and that they never talked art.

In fact, Tanning is one of the few women who played a prominent role in surrealism during the mid-twentieth century—along with Leonora Carrington, Leonor Fini, and Frida Kahlo—, but she preferred to reject categorizations in terms of gendered positionality or artistic movements alike. Throughout her impressively lengthy artistic career, she defied boundaries and experimented with a variety of media ranging from graphic arts, fashion illustration, ballet set-, and costume design, to soft cloth sculptures, printmaking, novel writing, and poetry. This transmedial extension of her dreamscapes constitutes a characteristics feature of her oeuvre.

In A Surrealist Stratigraphy of Dorothea Tanning’s Chasm, Catriona McAra fills a major gap in studies on surrealism by exploring the intriguing complexity of Tanning’s art through repositioning Tanning’s unjustly neglected literary writing at the heart of her creative oeuvre. McAra’s focus falls on a curious novella called “Abyss,” which Tanning fabricated during a desert trip to enchant Max with her episodic tale like Scheherazade’s. This gothic-flavored dark fairy-tale adventure traces “a fuzzy dream world emerging in full clarity” (McAra 6) that she kept returning to throughout her lifetime, and finally published in 2004 under the title Chasm: A Weekend. Starting out from the assumption of the continuity of the oeuvre, McAra convincingly argues that an analysis of this emblematic specimen of Tanning’s literary output sheds a new light on her highly enigmatic visual narratives and functions as “an atlas, an organizing principle between her historical work as a surrealist and her re-emergence as a contemporary, twenty-first century writer” (1).

McAra contextualizes Tanning’s oeuvre within the cultural historical frames of the surrealist movement and postmodernist postmillennial artistic practices. But besides the focus on temporal dimensions—significant in the case of a work like Chasm that took fifty-seven years for its author to complete—, McAra primarily adopts spatial, geological, and archeological metaphors to dig deep in the “untamed depth of consciousness” while excavating various layers of image/textual meaning. Her methodologically complex interfacing of visual and verbal artworks, informed by feminist aesthetics, art history, and cultural theory, represents a groundbreaking intervention in semiological investigations of intermediality, treading in the footsteps of seminal theoreticians like Mieke Bal or Liliane Louvel. As McAra formulates, she aims to embrace a multidisciplinary, undisciplined set of perspectives. In particular, Bal is allegedly a major inspiration for McAra, who uses “Bal-inspired concepts” for “embodied points of departure” (11), like the navel of the text, Cleopatra’s nipples, the fur of the fairy tale, or the surrealist heirloom. In line with the feminist agenda to reject the unequal hegemonic distribution of power, the visual and verbal material are not placed in a hierarchical relationship with one another, but constitute parallels meeting in infinity. Word and image mutually inform each other integrated within a dialogical, polyphonic image-textual dynamics. As McAra notes, the title and subtitle of Chasm: A Weekend may take part in a similar undoing of binary oppositions, of the spatiality-versus-temporality dichotomy: the main title lays claim to geological time, bordering in its vastness on the unconceptualisable, while the post-surrealist neo-gothic genre further enhances the anachronistic temporal confusion.

McAra traces Chasm’s intertextual ties to canonical surrealist novels centered on desire-driven narratives, subversive femininities, and curious plot twists, to noir crimes cases, eighteenth-century Gothic fiction, Freudian origin myths, Hollywood western films, and self-fictionalizing (pseudo)autobiographical accounts, as well as Tanning’s own literary and non-fiction writings and her more well-known surrealist canvases or soft sculptures. Readers gain background information on the novel’s publication history, the transformations of the manuscript, the editorial challenges and negotiations, and questions of distribution and are even provided an exciting glimpse at various draft versions and notebooks, textual ghosts haunting beneath the finalized narrative. McAra explains how comparing the different textual strata—the manuscript’s post-war surrealist version of 1949, the mid-career version of 1977, and the final, polished republication of 2009—allows us to understand rewriting in terms of erosion and entropy: both “insurmountable” and “yielding in riches” (9).

McAra’s reading of Tanning’s novel is structured by a series of interrelated spaces conceived metaphorically as archeological sites. Chapter One locates the local library of Tanning’s adolescence (in the mid-1920s’ Illinois) as a source of her life-long themes and interests, such as her penchant for the literary avant-garde and her appropriation of source texts. Chapter Two and Three explore complementary concepts of the gigantic and the miniature, wedding Gaston Bachelard’s poetics of space with Susan Stewart’s lyrical topographies, to perform a close reading of Tanning’s spatial souvenirs and metaphors. They focus on domestic miniature interiors and gigantic desert landscapes which fulfill equally significant, emblematic roles in Tanning’s oeuvre, along with the “architectural/cultural” folded into the megalithic/natural as a synecdoche” (12). Hence McAra maps the macro and micro coordinates of Tanning’s world, by excavating the strata of her novel, uncovering the chasm and the attic as sites of a collage methodology, and tracking visual/verbal disruptions, overflows, gaps, nestings, and parallels in words and pictures. Chapter Four offers a delicious little caesura that concentrates on Chasm’s elusive mythical beast, the lion the little girl plays with in the desert canyon. According to McAra, Tanning’s lion, a chimerical force, both hallucinatory figment of imagination and flesh-and-blood carnivore, enters into multimedial dialogue with a variety of emblematic predators: it pays homage to the roaring MGM lion, Henri Rousseau’s naïve gypsy curse, Madame De Beaumomt’s fairy-tale bete, and surrealist icons like Dali’s unfinished paternal lion heads or Oppenheim’s fur covered tea cup. However, the authentic aesthetic precursors of this furry beast are Tanning’s tactilely stimulating soft sculptures reminiscent of taxidermy. Chapter Five examines Tanning’s role in contemporary arts and literature with a focus on her late objects made at the time of Chasm’s republication, and studies how younger generations of artists—Kate Bernheimer, Brenda Shaughnessy, Anna Gaskell—quoted and reimagined Tanning as an inspiring starting point for their own artistic adventures.

In the preface to her second memoir, Between Lives: An Artist and Her World (2000), Dorothea Tanning described her life permeated by creative art with a vegetal metaphor: “I like to think of it as a garden, planted in 1910 and, like any garden, always changing. There are expansions and diminishments as well as replacements, prunings, additions. One person’s garden, one person’s life.” In her book Catriona McAra skillfully combines the playful curiosity and scientific scrutiny of a botanist while guiding us on an exquisite image/textual tour in the labyrinthine garden of Tanning’s art and life. Her critically self-conscious, re-embodied, demythologized perspective plants seeds of thought in the minds of arts scholars and aficionados alike.